"This is exactly who we all are. Tough, unapologetic & not afraid of being compared with men," wrote Masaba in her post on the controversial Serena Williams cartoon 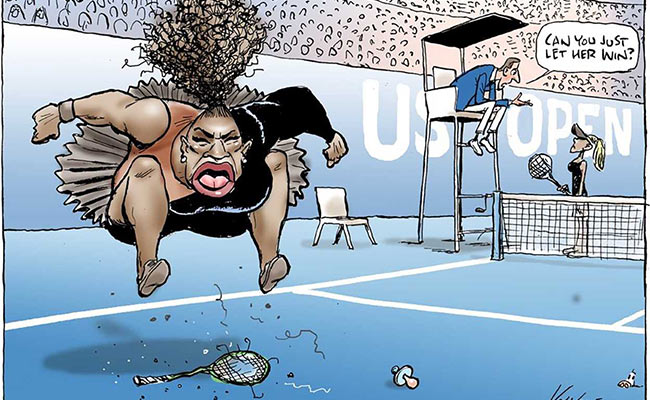 Australian cartoonist Mark Knight's caricature of Serena Williams - showing her having a meltdown during the US Open final - has come under fire for being racist and sexist and one of the many voices speaking out against it is that of mixed race designer Masaba Gupta. In a powerful Instagram post shared about 10 hours ago, Masaba criticised the cartoon for its "exaggeration of black women in shape, form & mannerism." The cartoon, published two days after Serena's heated exchanges with umpire Carlos Ramos during the US Open final on Saturday, depicts Serena in exaggerated physical proportions, throwing a temper tantrum. Her opponent, mixed race Naomi Osaka, is depicted as a slim blonde.

Serena's outburst - in which she called Mr Ramos a 'thief' after being deducted a point - has sharply divided the Internet with leading tennis figures such as Billie Jean King calling out the umpiring on double standards and pointing out that male players get away with similar or worse behaviour, and others condemning Serena's meltdown as childish and entitled and defending the umpiring as fair and just.

Masaba Gupta's post, however, is a critique not of what Serena Williams did on court but of how it has been portrayed in Mark Knight's controversial cartoon. The cartoon has been severely and widely criticised for being racist as it depicts a "butch and fat-lipped" Serena having a tantrum on court after she lost to Naomi Osaka. It has been accused into feeding stereotypes of the 'angry black woman' while also demeaning of physical appearance.

"This is exactly who we all are. Tough, unapologetic & not afraid of being compared with men," wrote Masaba in her post, "I stand for the racket busting, angry-young woman in the tutu who you are purely intimidated by."

In her takedown, Masaba criticised the cartoon not just for its racial overtones but also for its insinuation that women must be "elegant" and "delicate" while showing their displeasure.

"Did someone tell you that aggression was reserved only for men?" she asked.

Since being shared online, her post has collected over 8,000 'likes' and dozens of supportive comments. "Thank you! It physically hurt the way people went after her that day. I knew it would give them fuel and a focus for hate because they're intimidated," writes one commenter. "Couldn't agree more," says another.

That's exactly right,Mark knight. If it wasn't coming from such a dark,sad place...it was damn right. I am done with the exaggeration of black women in shape,form & mannerism. This is exactly who we all are. Tough,unapologetic & not afraid of being compared with men. Did someone tell you that aggression was reserved only for men? Or that women are meant to be more 'elegant' or 'delicate' about their displeasure? This is not misrepresentation,it is power.Ofcourse,I am biased and why shouldn't I be for someone who has had to endure so much to get here? First,I stand for Naomi Osaka who beat her childhood icon at the US open,at the age of 20. And then, I stand for the racket busting,angry-young woman in the tutu who you are purely intimidated by,because she could crush your skull like that racket lying beneath her. This is not an angry late-night rant,this is exactly how the elegant,polished & powerful women of this day & age feel.

Masaba Gupta's voice is especially relevant in this instance since this is not the first time she has spoken out about her racial identity. The daughter of West Indian cricketer Viv Richards and Indian actress Neena Gupta, Masaba said in a 2016 interview to Times of India: "I am half black, so no one can accuse me of cultural appropriation."

Well done on reducing one of the greatest sportswomen alive to racist and sexist tropes and turning a second great sportswoman into a faceless prop. https://t.co/YOxVMuTXEC

Here's what others on social media reacted to it:

A cartoon in The Herald Sun (an Australian news paper) depicts Serena Williams as a giant baby with a huge nose and lips, and Naomi Osaka as a blonde white girl. Y'all are really telling on yourselves, huh? pic.twitter.com/hweOX2M9ZP

Apparently this cartoon is not racist. This cartoon depicting Serena Williams as a buffonish, golliwog like figure with a giant mouth and red lips, and depicting her opponent Naomi Osaka (who is a mixed race black-Asian woman) as a dainty white blonde, is not racist. https://t.co/MAfC88qEcj

Whatever you think of the Serena Williams situation, I think we can all agree that this cartoon is disgusting. Erasing Naomi Osaka's blackness alongside a grossly racialised caricature of Serena, invoking racist stereotypes, is obscene. https://t.co/Z09T7rt5tt

Mark Knight responded to the criticism by saying that his cartoon was about bad behaviour and not gender. "Don't bring gender into it when it's all about behaviour," he wrote on Twitter.

Nobody seems to buying his argument - the Internet is deeply divided on how they view Serena Williams' conduct on court but it is as one on the subject of the distasteful and offensive cartoon.