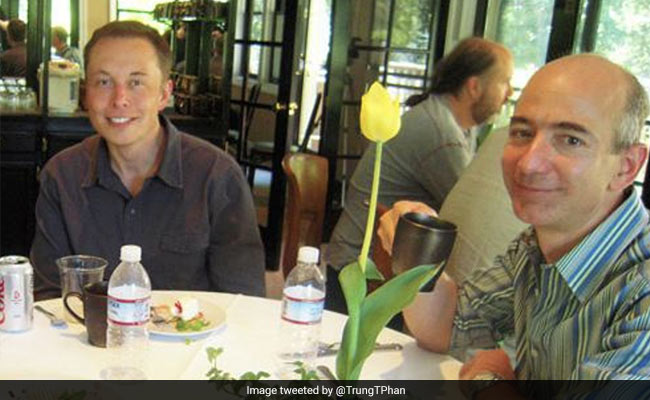 Elon Musk and Jeff Bezos met for dinner in 2004.

Tesla chief Elon Musk and Amazon CEO Jeff Bezos have been feuding publicly for years, but not many know that the two once met for a friendly dinner in 2004. A photograph from the meeting is currently going viral on social media - and it even captured Elon Musk's attention, who reacted to it on Twitter.

While Mr Musk and Mr Bezos are not rivals in any earthly business -- the former has made his fortune in electric cars, the latter in e-commerce -- the two have similar space ambitions. Jeff Bezos started Blue Origin in 2000, two years before Elon Musk launched Space Exploration Technologies Corporation or SpaceX.

Over the last few years, Blue Origin and SpaceX have clashed over launch-pad lease opportunities, landing-pad patents and more, reports GeekWire. Meanwhile, Jeff Bezos and Elon Musk have occasionally locked horns over their rockets and their different plans of space exploration.

But in 2004, both the companies were still in infancy. That was when Mr Musk and Mr Bezos had one of their few in-person interactions when they met for dinner. Even then, things were testy between the two.

"I actually did my best to give good advice, which he largely ignored," Elon Musk said after the meeting, according to Yahoo News.

A photograph from the meeting was shared on Twitter earlier this month, and captured Elon Musk's attention on Sunday. "Wow, hard to believe that was 17 years ago!" he wrote while reacting to the pic, which shows the two billionaires at a dinner table.

Wow, hard to believe that was 17 years ago!

The photograph has received thousands of 'likes' and comments on the microblogging platform.

"Guy in the back has no idea he's got 2 absolute legends sitting next to him," wrote one Twitter user.

"While SpaceX vs Blue Origin makes for good headlines and interesting compare/contrasts they have different goals and space is big enough for both. I don't think they're competitors in the traditional sense," said another.

Elon Musk briefly overtook Jeff Bezos as the world's richest person in January, before the Amazon chief reclaimed the title.