A video has surfaced on the internet showing a zoo keeper Jay Brewer, holding a python in his hands. 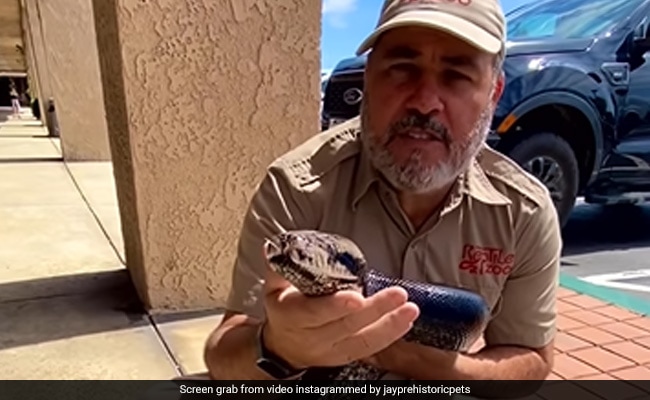 Snake videos can give most people the heebie-jeebies, especially when clips of people embracing snakes surface online. What would you do if you came across a snake? You'd probably run for your life or keep a safe distance from it.

A video has surfaced on the internet showing a zoo keeper Jay Brewer, holding a python in his hands. After years of caring for this python, he tells his audience that they have become friends. He continues by explaining that while the snake appears to resemble a rainbow, it is actually a reticulated python. Mr Brewer can also be seen cuddling the snake at the end of the video.

The video has been posted on Mr Brewer's official Instagram page on Thursday. "Wow a picture says a thousand words but how much does a video like this say," Mr Brewer wrote while sharing the post.

Since being shared, the video has amassed over 1.1 million views, more than one lakh likes and still counting. Numerous users have been stunned watching the viral clip and have swamped the post's comment area with surprising remarks.

Getting surprised by the snake's reaction, one user wrote, "That's the calmest Retic I've seen, all the retics at work are either jerks or just very quick."

"Incredible! That colour is spectacular," wrote a second user.

Another user commented, "Omg that is just gorgeous, you certainly have some incredible snakes. What are they like to handle? I watched a programme about pythons and they were saying they are very aggressive but I love them so much."