"They're fighting... One just snapped at the other." 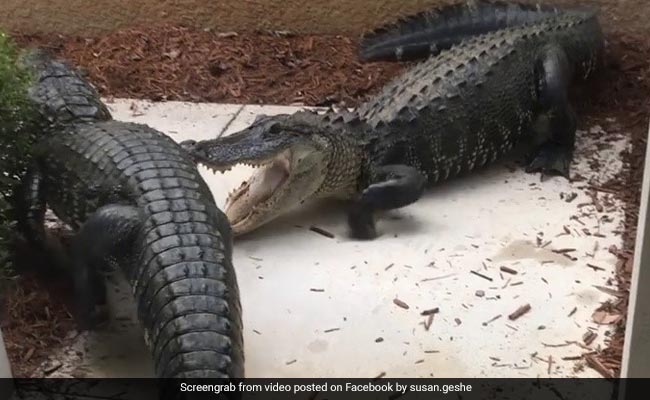 A woman filmed two alligators fighting outside her front door.

Two alligators were found fighting each other outside a Florida woman's home. Susan Geshel was getting an early morning cup of coffee last Tuesday when she heard a loud pounding on her front door, reports The Palm Beach Post. When she went to check on the noise, the Fort Myers resident was shocked to see two huge alligators snapping at each other on her front porch.

"They're fighting... Oh my god they are fighting," Ms Geshel can be heard saying in the video she recorded and shared on Facebook. "One just snapped at the other."

According to Ms Geshel, one of the alligators clamped its jaws around the other and pinned it to the wall. The scene was captured in the horrifying video she shared on Facebook. Take a look:

The video has collected nearly 40,000 views and several shocked comments since being posted online.

"Wow that's amazing but scary at same time!" wrote one person in the comments section.

"They are huge - yikes," another said.

According to Fox News, Ms Geshel said that she had lived in the area for 15 years, but this was the first time she had seen alligators outside her home. She reported the sighting to the Florida wildlife department but the two alligators soon left her property.

After 20 minutes of fighting, one of the gators crossed the street to a neighbour's house. The other may have gone to a nearby pond, Ms Geshel said. "They made a mess on the front door," she added.

Last month, another alligator fight was captured on camera in South Carolina when two reptiles locked jaws on a golf course.