The shark held the camera in its mouth and tried to swallow it before dropping it back into the sand and swimming away. 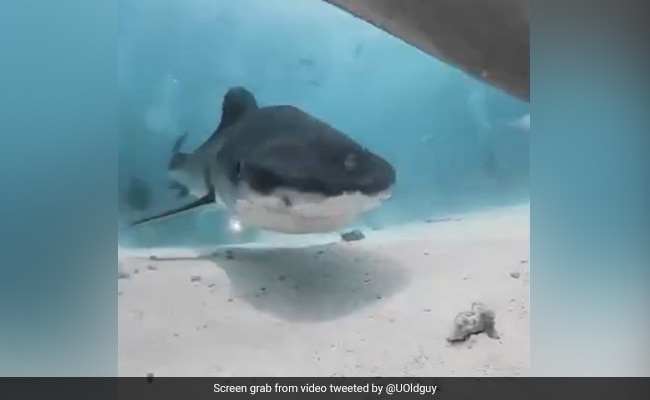 Even if a person is a qualified scuba diver, the terms "shark attack" or "shark is near" can make anyone feel uneasy. A recently shared online video, however, reveals that a scuba diver caught footage of a shark charging at him, swallowing the entire camera, and then spitting it out.

In the viral video, you can watch the tiger shark's strange decision to make the underwater camera of a scuba diver its next appetising treat. The shark attempted to swallow the camera while holding it in its mouth before dropping it back into the sand and swimming away. The entire incident was captured by the camera and posted to social media by a Twitter user named UOldguy.

The video was shared with a caption that reads, "Tiger shark tries to eat GoPro. The resulting footage offers a look at the shark's teeth, throat, and the inner walls of its gills." The Twitter handle also gave credit to an Instagram account named @zimydakid, who is described as a Swiss-based cinematographer.

Tiger shark tries to eat GoPro. The resulting footage offers a look at the shark's teeth, throat and the inner walls of its gills.
From IG: @zimydakid
Swiss based cinematographer pic.twitter.com/nx5JtImT3l

The shark's internal organs were also seen in the footage. The shark tried to swallow the camera, but instead, it spat it back out into the sand and swam away.