Megan Milan was visiting Chia Lai Orchid earlier in June when a three-week-old elephant became rather attached to her. 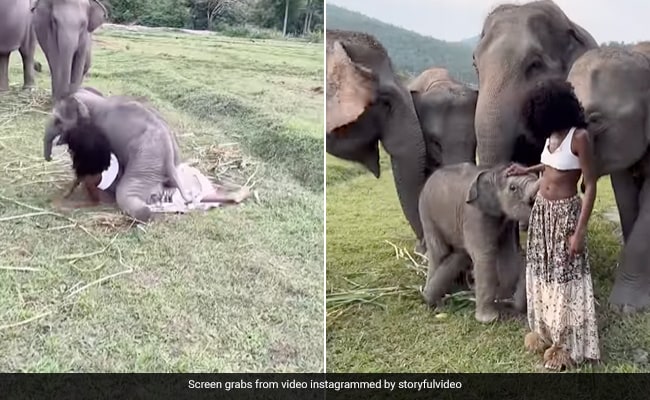 The video has gone viral on social media.

A model recently had a playful encounter with a baby elephant when she visited a sanctuary in Chiang Mai, Thailand.

Megan Milan was visiting Chia Lai Orchid, a sanctuary that rescues elephants, earlier in June when a three-week-old elephant became rather attached to her. The hilarious footage, shared by Storyful, shows the boisterous baby getting close to Ms Megan bumping her to the ground before rolling on top of her.

The video shows the baby elephant coming close to Ms Megan repeatedly and playfully tugging at her skirt. The younger was stronger than he seemed as he managed to tear the model's skirt by stepping on the hem.

On the other hand, Ms Megan, a model based in the United States, can be heard laughing as the baby elephant pushes and shoves her to the ground as it tries to play. At one moment, the three-week-old calf is also seen rolling on top of her.

Ms Megan said that she wasn't injured. “As you all can see, we were just playing around. This little guy is only three-weeks old,” she added.

As per the Independent, the model also went on to say, “I'm used to being around elephants but I had never been around one so young. So I asked to go see him. He was definitely a little heavy and strong.”

Coming back to the video, since being shared, it has gone viral on social media. One user wrote, “He made you look soo tiny lmao I didn't realize how big they actually are.” Another said, “once in a lifetime moment - who can say they've wrestled an elephant.”