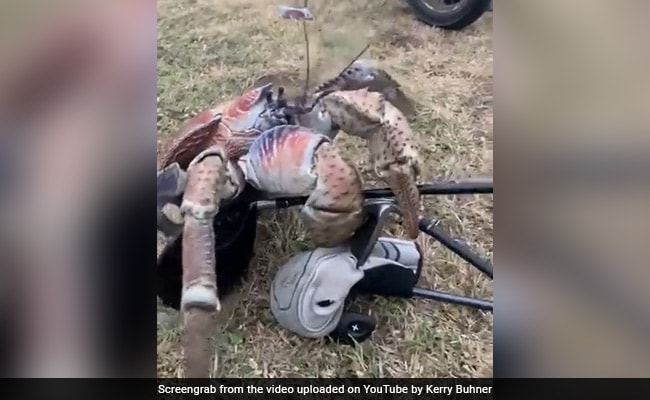 In one of the videos, the crab can be seen clutching the end of a golf club.

A group of golfers in Australia were shocked when a huge crab joined them for a round - and broke one of their clubs in half. Hair-raising footage filmed on Christmas Island shows the enormous robber crab slicing through the golf club effortlessly. The video was shared on Reddit this Sunday, from where it has spread like wildfire online.

According to news.com.au, Christmas Island local Paul Buhner and his friends came across the gigantic crab in October 2020 and was surprised to see it doing the rounds of social media in January 2022. He said it spread online after his son shared the video with a friend.

In one of the videos, the crab can be seen clutching the end of a golf club. A man, named AI, attempts to dislodge it from the club with little success as the robber crab continues to maintain a death grip on it.

In a second clip, the robber crab (also known as coconut crab) was seen snapping the club in half using its pincers.

"You know what, just let him have it, mate. He's won the victory - he's beaten us," Mr Buhner said.

The coconut crab (also known as robber crab or palm thief) is the largest terrestrial arthropod in the world and can grow up to 3-feet and 3-inches in width. It can weigh more than 4 kilograms and live up to the age of 50 years. These exceptional climbers are colloquially called robber crabs for their habit of carrying away any foreign items they come across, according to Parks Australia. These crabs are particularly fond of shiny objects.