Watch: Man In US Breaks Guinness World Record After Eating 17 Ghost Peppers In One Minute

Ghost peppers or Bhut Jolokia chili peppers stand as one of the hottest peppers in the world as they contain one million Scoville Heat Units. 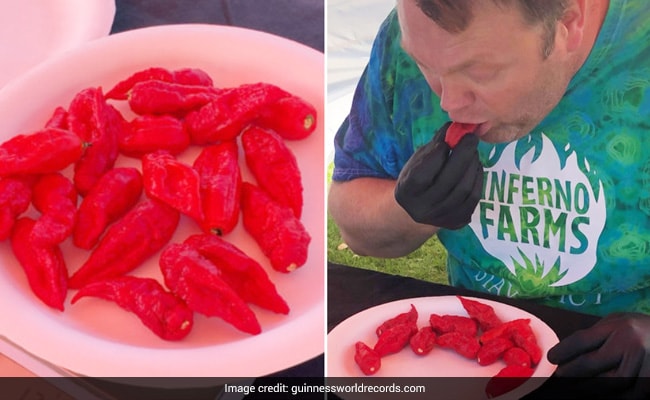 Gregory Foster set the record after he ate 17 ghost peppers in 60 seconds.

A man in the United States recently broke the world record for the most ghost peppers eaten in one minute.

According to Guinness World Record (GWR), Gregory Foster from California set the record after he ate 17 Bhut Jolokia chili peppers in 60 seconds. He broke the record in November 2021 in San Diego, as per a press release, however, he got officially recognised on Monday.

According to the press note, Mr Foster has always loved spicy food and even grows his own peppers at home. He has spent decades pushing his tolerance level for spicy foods, which is why he is now able to stomach the hottest peppers across the globe.

"This record attempt is a personal challenge to see how far I can push myself and my love of the super hot peppers," Mr Foster said, adding, “As a chilli lover, I've been trying to advance the awareness and the excitement surrounding the super-hot chilis out there.”

"This attempt was solely a personal endeavour to achieve another Guinness World Record alongside my currently standing [ones]. I love chilli eating and pushing myself,” he went on to say.

Meanwhile, as per GWR, the previous record was held by vegan speedeater Mike Jack, who managed to eat three of the hot peppers back in 2019.