Martyna Trajdos was slapped by her coach before a judo fight 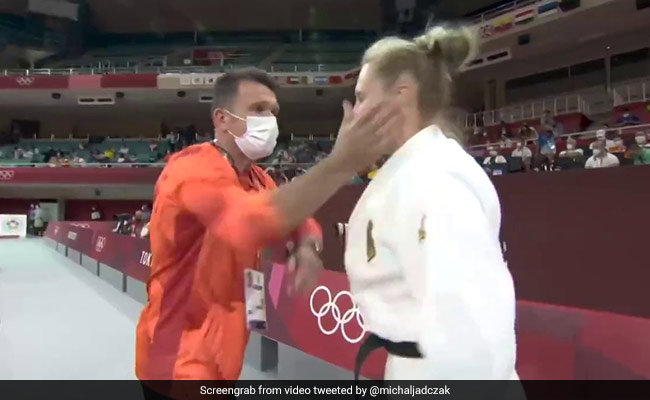 Olympics viewers were left shocked after German judo star Martyna Trajdos was slapped in the face by her coach before a judo match. Footage that has gone massively viral on social media shows the German athlete being shaken and slapped by her coach before entering the ring. The 32-year-old judo star, however, has defended the slap as a 'pre-fight ritual'.

"Don't worry guys! That's the ritual which I chose before fights. My coach is just doing what I want him to do to fire me up!" Martyna Trajdos wrote on her Instagram story Tuesday after the video went viral, reports New York Post. "I need this before my fights to be awake," she said.

In the short clip, the German athlete turns around before entering the ring to face her coach, Claudiu Pusa, who drops his bag to shake her violently and slaps her twice. According to Fox News, the incident unfolded prior to her elimination in a round of 32 fight against Hungary's Szofi Ozbas at the Tokyo Olympics.

Ms Trajdos also shared a video of the incident on Instagram Wednesday, once again to defend her coach. "As I already said that's the ritual which I chose pre competition! My coach is just doing what I want him to do to fire me up!" the poland-born athlete wrote.

She joked that the slap could have been harder after losing to Szofi Ozbas. "Looks like this was not hard enough. I wish I could have made a different headline today," Ms Trajdos wrote.

The clip, meanwhile, has gone viral with a staggering 10 million views on Twitter, eliciting shocked reactions.

"I have an overwhelming urge to smack him back. (even if this is some mutually acceptable, bizarre training technique)," one Twitter user wrote.

I have an overwhelming urge to smack him back. (even if this is some mutually acceptable, bizarre training technique). https://t.co/1L21i6WEf6

"There is no context in which this is okay," another declared.

There is no context in which this is ok, @Olympics. https://t.co/Bn85NNhvS3

It also sparked a number of humourous comparisons:

Me and my friends before an Escape Room https://t.co/7XWrliXfUL

Me telling myself that I don't need to buy something https://t.co/EyGuHhLmUx

Me telling myself stop thinking about cup noodles https://t.co/OhsaFIVLhu

What do you think of this pre-fight ritual?