Read inOther Languages
This Article is From Aug 11, 2020

The video was captured at Yellowstone National Park 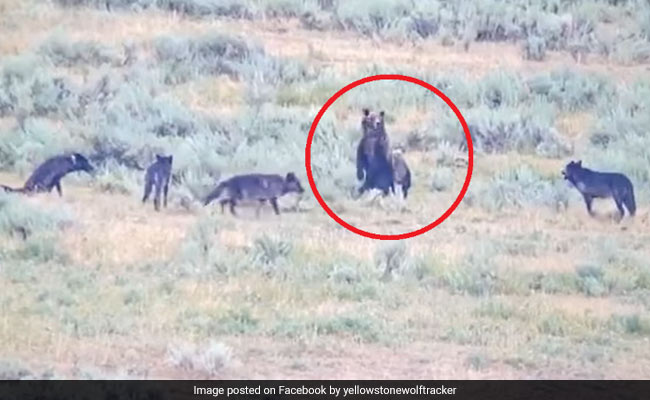 A mother bear was seen protecting her cubs at Yellowstone National Park.

A video that has gone viral on Facebook shows a mama bear protecting her two cubs from a pack of wolves. The incident took place recently at USA's Yellowstone National Park and was captured on camera by Taylor Bland. According to Cowboy Daily, Ms Bland is a guide at wildlife adventure company Yellowstone Wolf Tracker.

She was out on a safari at Yellowstone when she filmed what she called "the most epic bear-wolf interaction [she's] ever seen."

The video, which was shared on Yellowstone Wolf Tracker's Facebook page, shows a mother grizzly and her two cubs being chased by a pack of wolves. The mother bear was filmed standing up on her hind legs to intimidate the wolves of the Junction Butte pack, who looked like they wanted to prey on her cubs. The footage shows her turning the tables on the wolves by chasing them away to protect her babies.

According to Distinctly Montana, the Junction Butte pack's territory includes Slough Creek and part of the Lamar Valley. The park's wolf population hovers around 90 to 110 wolves.

Luckily, the wolves of this pack soon received the message and retreated, leaving the bear family alone.

"This mother grizzly bear and her 2 cubs of the year were harassed and chased off by some members of the Junction Butte pack!" wrote Yellowstone Wolf Tracker while sharing a video of the interaction.

Since being shared on Facebook four days ago, the video has collected over 2 lakh views and a ton of amazed reactions.

"Look at those little babies trying to be scary by standing on their hind legs like momma," wrote one Facebook user.

"What an incredible recording! It is truly epic! It is such a relief to know the cubs escaped unhurt," another remarked.