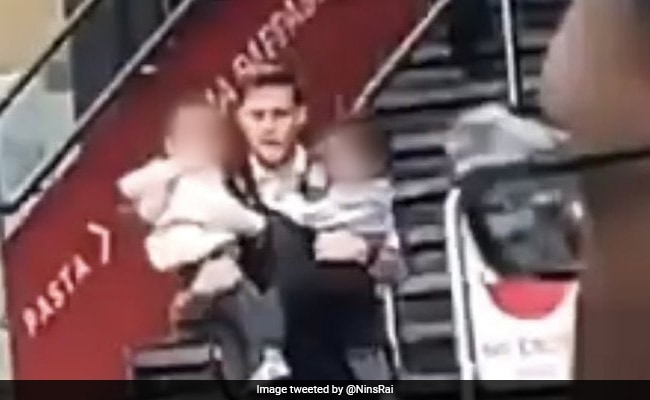 A policeman was spotted carrying two children to safety after a huge fire.

A brave police officer was spotted rescuing two children from a huge fire that broke out at a London train station on Monday. Dramatic footage shows the cop carrying the two children - one in each arm - after a large fireball erupted under Elephant and Castle train station, according to The Sun.

At its height, some 100 firefighters were sent to tackle the fire in three commercial units under railway arches at the station. Shocking videos shared on social media show thick clouds of black smoke billowing out of the South London area where the blast occurred.

In one such video, eagle-eyed viewers noticed the cop hurrying down the stairs with the two children, leaving the burning building behind.

Twitter users showered praise on the unidentified police officer, asking that he be recognised by the government for his bravery. "Thank you for your service," wrote one Twitter user.

A police officer carrying two children to safety at Elephant & Castle fire this afternoon. Thank you for your service. pic.twitter.com/NNp9WbbIBq

"Policing is more than dealing with crime, it's much more than that. #Hero," another said.

Heroic @metpoliceuk Police Officer Rescues Two Children From Elephant And Castle Explosion. Policing is more than dealing with crime, it's much more than that. #Hero 💙https://t.co/oJV8lIcoJ9

The fire broke out near the Elephant and Castle shopping centre, but the exact cause is unknown. The Metropolitan Police said it was not believed to be terror related, reports Daily Mail.

Six people were treated by medics at the scene and one was hospitalised after the blaze. London Fire Brigade deployed 10 fire engines to fight the flames and urged people to avoid the area. It also advised people living in the area to keep their windows closed in order to avoid smoke inhalation.

Ten fire engines and around 70 firefighters are attending a fire at railway arches near to #ElephantCastle railway station. Please avoid the area and close all doors and windows https://t.co/L7YXgTDzE0

The fire was brought under control around 4 pm local time.

"I want to thank our brave emergency services... who acted quickly to ensure both residents and passengers at the nearby station were safely evacuated," London mayor Sadiq Khan said.