As she demonstrates her exceptional skipping talents, passers-by and spectators tilt their heads in surprise and clap for her. 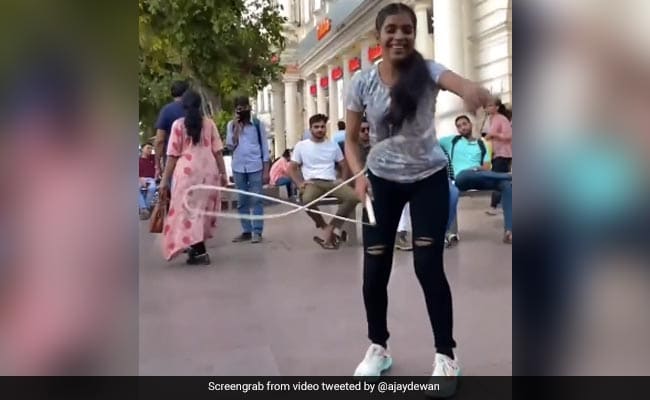 The video has received countless comments from people praising her abilities.

There is no dearth of talent in India and thankfully, the internet now makes it easy for a person to showcase his/her skills. One such video from Delhi's Connaught Place - which has now become a perfect ground for talented people to display unique skills - has surfaced on Twitter.

The video was shared by a user in response to one of industrialist Harsh Goenka's tweets about Japanese girls dancing to Kala Chashma, with the caption, "How about this in CP?"

The video shows a girl, dressed in a t-shirt, jeans, and sneakers, grooving to the song 'Twist' with a jump rope in her hands. Over the course of the 18-second clip, the girl shuffles and dances to the peppy song with a jump rope, trying out various poses and stunts. As she demonstrates her exceptional skipping talents, passers-by and spectators tilt their heads in surprise and clap for her.

How about this in CP pic.twitter.com/ArRpSmQzvk

The video posted on November 26, has received over 27,000 views, more than 100 retweets, and countless comments from people praising her abilities.

One user wrote, "We have so much talent in the country it is just they are not promoted. The corporates should help these people.'' "That's some skill,'' wrote another user while a third wrote, '' This is so amazing.''