Demi Lovato Sings To Ghost To Help It Overcome "Trauma" 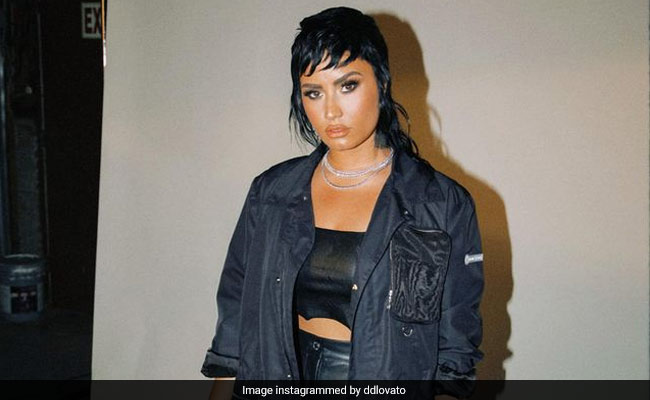 Demi Lovato sang to a 'ghost' in a clip from her docuseries, Unidentified With Demi Lovato

A video from Demi Lovato's documentary series Unidentified With Demi Lovato claims to show that the popular singer-songwriter has had an interaction with a ghost, named Carmen, who tells Demi Lovato about "trauma" caused by men. Well, it doesn't end here. Later, the American star helps Carmen heal with a song. As weird as it sounds, the ghost liked Demi Lovato's performance and even offered a “standing ovation”.

The video shows Demi Lovato in a room, as her colleagues, Matthew Scott and Chris Smith, a paranormal investigator, stand by the door It was shot during their visit to the Vulture City, in Arizona, United States, where the trio set up an EMF device, according to Ladbible. The singer talks to the spirit, known as Carmen, who communicates with them through the device with a buzzer sound.

“Have you seen anything like ETs here, or UFOs? Star people,” Demi Lovato asks Carmen. The device lets off a sound.

As the two men leave the room, Demi asks the ghost: "Did you not want to say anything else because the boys were in here?"

The device buzzes and Demi continues: “I think - Oh, I get that a lot. She has trauma. That's why she doesn't like men. I have trauma, too, so I feel you and I get it."

At this point, the two men, standing outside the room, decide to enter the discussion. They suggest Demi Lovato sing to the ghost. “Well I always sing “Skyscraper” when I feel like singing something emotional,” the singer says and starts singing it. As the song ends, the machine makes a noise; which the three people take as a compliment. "That's the coolest standing ovation I've ever had,” Demi Lovato says.

The clip has resurfaced on Reddit and has gone viral, racking up 11,000 upvotes.

But not many, who commented on it, were amused by Demi Lovato's performance.

“I feel considerably stupider after this,” said one Reddit user.

Some said the ghost, instead of haunting people, was being haunted by the three. “It's a cool reversal to have live people haunting the dead,” said this person.

There were also those who believed the whole thing was “staged”. “Totally staged. Those dudes were pressing the button for that thing to go off. Lol. I bet it was Demi's house or should I say E.T. Home Home,” said a user.

The docu-series is a Peacock TV original and was released a few months ago. The clip, however, went viral after it recently resurfaced on Twitter.