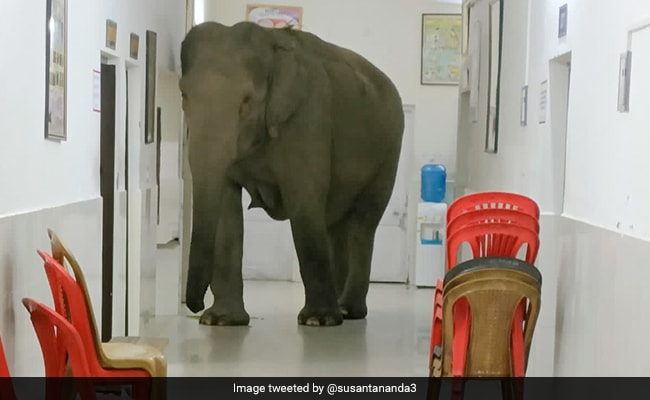 Elephants enters a hospital ward inside an army cantonment

How often do you think that you'll bump into an elephant inside a hospital? Well, patients and doctors in West Bengal's Jalpaiguri army hospital had this rare encounter. Indian Forest Service (IFS) officer Susanta Nanda posted a close-up shot of two wild elephants having an adventure inside the Binnaguri army camp hospital. “Elephants in the room…From Jalpaiguri Cantonment,” he said while captioning the post.

Elephants in the room…
From Jalpaiguri Cantonment. pic.twitter.com/ipbFR8bthG

A video of the two elephants taking a stroll freely in the corridors of the hospital has also surfaced online. In the video, one of the elephants is seen coming through a door, squeezing its big body into the corridor.

The elephant is seen standing in the corridor for a little while without moving, while the amazed staff members take pictures.

The pictures posted by Mr Nanda have amassed 1,610 likes and 138 retweets.

Twitter users were startled to see the elephants in the hospital. A user wrote, “I think this happens when you occupies their habitat and make structures on that. It's their land and want it back.” Another wrote, “Did anyone address the elephant in the room?.” Third user wrote, “Here for medical checkup,” Fourth user commented, “It was a surprise inspection visit to check if everything is well in the hospital is what I understand!”