The video captures the hilarious moment when the elephant ticked the journalist in the ear and showered him with kisses as he was making a report. 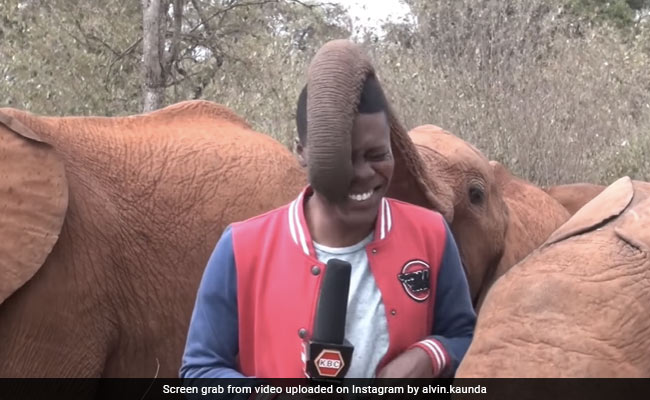 The video captures a heartwarming moment between a reporter and an elephant.

Elephants are considered to be one of the most adorable creatures, who win our hearts with their cute and playful antics. They are also exceptionally intelligent and sensitive animals, capable of understanding emotions. A recent viral video captures an absolutely heartwarming moment between a TV reporter and an elephant. As the reporter was talking about a wildlife trust, while standing amid elephants, one of them decided to shower him with love and affection.

Sheldrick Wildlife Trust, a Kenya-based organization that works for the "rescue, rehabilitation and release of orphaned baby elephants," shared the video on their official Instagram account. "Everyone wants to be the star! Kindani was so inspired by Alvin's performance that she decided to steal her own moment in the spotlight," read the video's caption.

The video captures the hilarious moment when the elephant tickled the KBC journalist in the ear and showered him with kisses as he was making a report. Meanwhile, journalist Alvin Patterson Kaunda tried to keep a straight face and maintain professionalism the entire time. However, he burst into laughter after the elephant used its trunk to kiss him on his face. The crew was also heard joining him in the laughter.

The sweet video has gone viral, and people can't get enough of the adorable act. One user wrote, ''First on my feed this morning, couldn't think of a better way to start the day...sweetest of blessings.'' Another commented, "That is gorgeous-just what you need on a cold , misty morning to cheer you up.'' A third said, "I've watched this over and over, and it still makes me laugh every time! Silly girl Kindani, I wouldve have expected this from Bondeni.''

This is not the first time that an animal has interrupted a journalist on duty. In a hilarious video shared on November 5, a parrot stole the earphone of a Chilean reporter while he was talking about theft in one of the regions of the country.