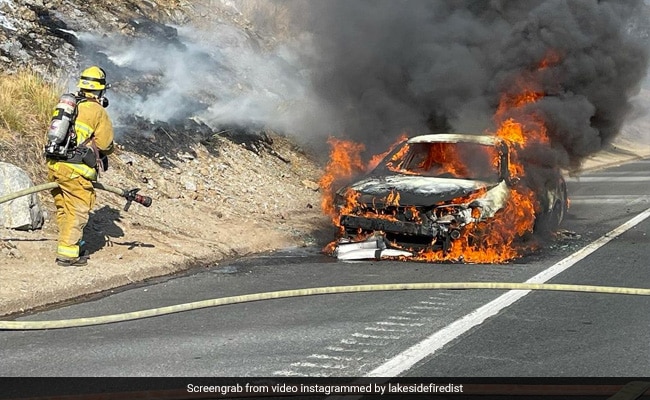 Footage shows an elderly couple being rescued from their burning car

What would you do if you see a car suddenly turn into a fireball on an expressway? Would you stop and help? A video has emerged on social media that shows people doing just that to pull an elderly couple out of their vehicle engulfed by a huge fire. The terrifying footage shows the fire emanating from the car's rear side, near its fuel tank, and flames menacingly rising to the sky and onto the road. The couple, likely into their 90s and from Phoenix got stuck in the vehicle and were unable to move out on their own.

The Instagram post also had some photographs that showed Lakeside fire department officials at the site and dousing the fire. CBS News reported that the accident happened in Lakeside area of California.

Initially, two bystanders jumped in to help them – each one trying to pull out one person from the front doors of the car. The others then join in to shift the couple to safety.

The elderly man fell on the road as he was pulled out of the front seat and possibly passed out. He could not walk and had to be pulled and laid on the road. The video showed the young man, who pulled out the vehicle occupant, in distress after suffering burn injuries. He had gone very close to the fire, which was turning wild after being aided by the wind, to protect the elderly man.

The woman who shot the video from a vehicle on the opposite side of the expressway repeatedly said in utter shock, “Oh my God.” She and her male colleague then decided to assist in the rescue effort.

Instagram users praised the bravery of those who sprang into action to help the elderly couple.

“Angels do walk amongst us,” said a person with the username “mummaleeap'.

“God bless these heroes and the couple,'' said “m.roadtofitness”.

“Can't even imagine! God bless everyone involved and it's so inspiring to see that kind of reaction!” said Melissa Langway Kelley.

“This is absolutely incredible... Do we know the condition of everybody involved at this point?” asked Gillian Seifert.All those injured are safe and the elderly couple would be released from the hospital soon.