Watch: Cops Rescue Kangaroo From Lake. It Jumps Right Back Into Water

As soon as they put it back on dry land, the startled kangaroo promptly jumps back into water 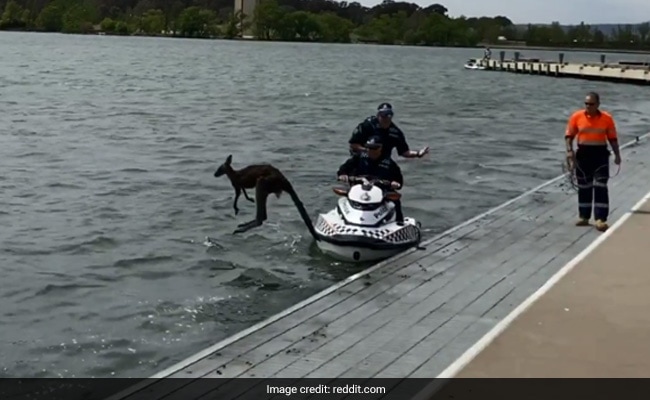 A kangaroo rescue video that ends with a twist is amusing many.

A video of a kangaroo jumping back into the lake it was rescued from is making thousands chuckle in amusement. The video going viral on Reddit shows police on a jetski launching a rescue mission to save the kangaroo swimming in Lake Burley Griffin, Canberra, reports ABC News.

In the short video, two police officers on a jetski haul the eastern grey kangaroo to the shore. However, as soon as they put it back on dry land, the startled kangaroo promptly jumps back into water and begins swimming away. The video ends with the cops slowly jetting towards the kangaroo to rescue it again.

According to ABC News, kangaroos are able swimmers. However, witnesses said that this female roo had been stranded in a part of the man-made lake where the shores are lined with concrete walls.

Dean Isreb, a passerby who witnessed the incident, told ABC News that police were able to successfully rescue the kangaroo second time around.

"They went back and got him a second time from the water and some council workers hog-tied him and carried him to their truck," Mr Isreb said.

ACT Police told news.com.au that the roo was again rescued and taken back to the bush. "ACT Water Police officers were alerted to a kangaroo in the Central Basin of Lake Burley Griffin," a spokesperson said.

Last year, police in Melbourne rescued and saved a kangaroo struggling in the sea.