The child manages to get out of the way and is seen throwing himself against an adjoining railing, thereby saving himself. 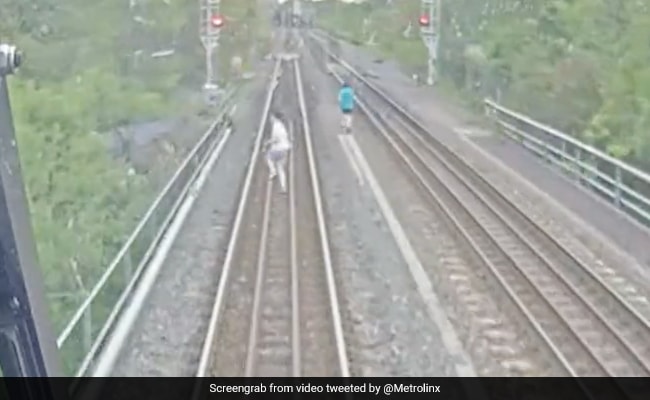 The video has garnered more than 20,000 views on Twitter

A video which shows two children running along the tracks of a train as it approaches them has been posted online with many internet users reacting to one of the kids lucky escape. The hair raising video from Toronto has been posted on Twitter by an account called Metrolinx.

⚠️ This heart-stopping video shows the dangers of walking on railways. Watch as young people come within a foot of serious injury or death while trespassing on a rail bridge in Toronto.

Talk to your kids about rail safety. Resources here: https://t.co/X5uS2ewqui#MetrolinxFYIpic.twitter.com/R8P6dmDFdW

The train which belongs to Canadian transport firm Metrolinx, can be seen heading towards two seemingly unaware kids, as they run along the tracks with their backs turned to the locomotive. A third child is even seen standing off on an adjacent track, away from the train.

The other child however who is running  wearing a white t-shirt and shorts can initially be seen running alongside his friend, but then decides to come on to the track and quickly cross over. The child appears to come mere inches of being hit by the train. The child manages to get out of the way and is seen throwing himself against an adjoining railing, thereby saving himself.

The video has garnered more than 20,000 views on Twitter and with many users commenting on the lack of awareness from the children. However some users also pointed out that rail services across cities should have guard rails to prevent individuals from walking on to the tracks as well as passenger bridges to facilitate crossing through.

The video is from May 20 and no mention has been made of any action being taken against the kids.