Watch: Boy Tries To Play Basketball In Freezing Weather, This Happened Next

The youngster was playing basketball outside in the freezing cold. However, as he attempted to throw the ball into the basket, it became stuck. 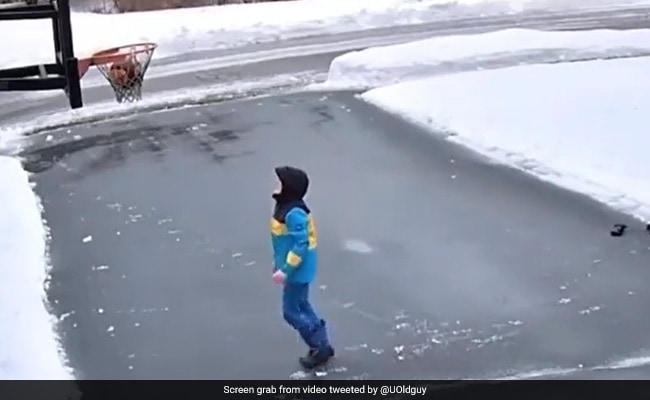 The boy threw the ball in the basket, and it got stuck.

Temperatures in Canada throughout the winter are usually below or around zero degrees Celsius and tend to linger between -5 and -15 degrees Celsius. This weather is generally freezing, and heavy snowfall is common in November and December. This bitterly cold weather can be brutal in many parts of the country. A viral video of the Canadian winter, on the other hand, depicts the harsh yet fascinating aspect of winter in this country.

The video depicts a boy playing basketball on his own on the court. He attempted to dunk the ball inside the basket after dribbling it for a few seconds. He was successful in doing so, but the results were unexpected.

When you dunk the ball into the basket, it usually returns to the court, but this time the ball became stuck inside the basket because the basket had frozen due to the cold weather. Because of this unexpected situation, the boy appeared unhappy in the video.

The video has become instantly viral on social media platforms and received more than 30,000 views on Twitter. The video was posted by the Twitter account UOldguy and has received over a thousand likes. After watching the video, the viewers posted several interesting remarks in the comment section.

However, severe winters have been creating several problems for the residents of this country. In January 2022, Canadian authorities found the bodies of four people, including a baby, who apparently froze to death in a blizzard a few metres from the US border along a route used by migrants. And the temperature when the bodies were found amid vast snowdrifts, taking the wind into account, was minus 35 degrees Celsius (minus 31 degrees Fahrenheit).