Viral footage shows the alligator smoking from the mouth after eating the drone. 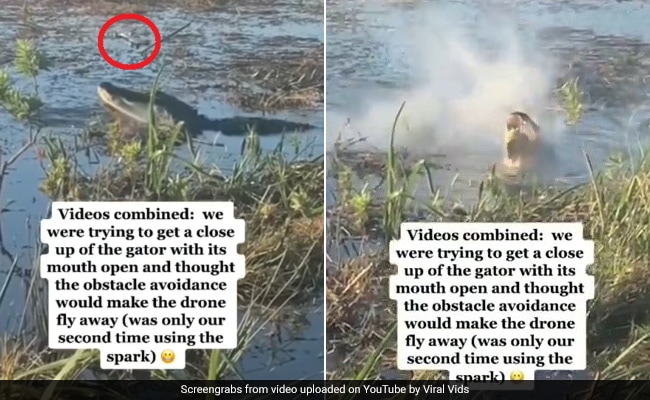 Footage shows an alligator smoking from the mouth after snatching a drone out of air.

Sundar Pichai runs a pretty straightforward Twitter account - sharing blog posts by Google, updates about the company's latest products, tweeting good wishes on festivals and retweeting articles that catch his eye. But this morning, the CEO of Google and Alphabet took some of his followers by surprise when he retweeted a video of an alligator smoking from the mouth after catching a drone out of the air.

The footage, reportedly filmed in Florida, shows the alligator snapping its jaws shut around the small drone. However, the device likely combusted moments afterwards, as the video shows smoke billowing out of the animal's mouth.

In a caption accompanying the video, the drone operator confessed they were trying to get a close-up shot of the animal and thought that drone sensors would help keep it a safe distance from the alligator.

"We were trying to get a close up of the gator with its mouth open and thought the obstacle avoidance would make the drone fly away. [It] was only our second time using the spark," wrote the drone operator.

The footage was shared on Twitter this morning by Chris Anderson, the founder and former CEO of 3DR, a California-based drone company. "Alligator snatches drone out of the air and it promptly catches fire in its mouth," he wrote while sharing the clip. Sundar Pichai retweeted his post without any additional comments.

Alligator snatches drone out of the air and it promptly catches fire in its mouth https://t.co/vDfidrrhsz

The video has outraged many Twitter users who called for stricter regulation of drones, especially around animals.

This is part of why it is illegal to harass wildlife by flying drones near them. This was devastating and disgusting.

One Twitter user branded the act "cruel and sad"

This is cruel and sad!

"I hope the people who did this get caught and fined!" another said.

People doing stupid stuff like this is why there are so many rules for flying drones. I hope the people who did this get caught and fined! https://t.co/aJ2D9Le9Xy

One person said he was amused to see Sundar Pichai retweeting the clip. "Maybe it's nice to know he gets the same thrill out of the bizarre but enjoyable content we all find on the internet, often through his company's products," the Twitter user wrote.

For some reason the fact that @sundarpichai retweeted this really amuses me. Maybe it's nice to know he gets the same thrill out of the bizarre but enjoyable content we all find on the internet, often through his company's products.