Read inOther Languages
This Article is From May 21, 2020

Watch: A Tiny Frog In A Fight With Leopard Has Twitter Amazed

"Unbelievable fight between a frog and leopard. And see who wins," wrote IFS officer Susanta Nanda while sharing the video. 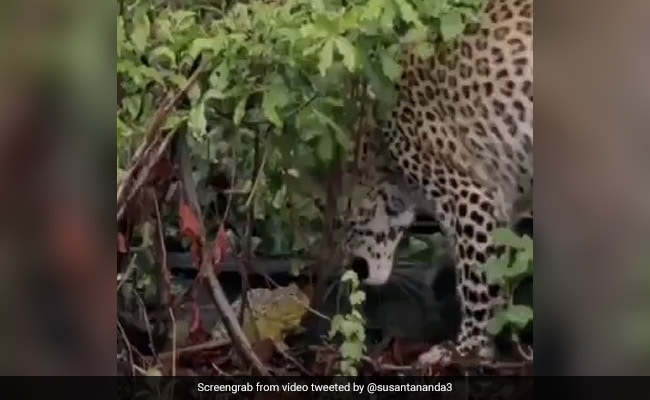 A frog and a leopard face off in this fascinating video.

A David vs Goliath fight between a small frog and a big cat has left Twitter users amazed. A video that was shared this morning by Indian Forest Services officer Susanta Nanda on Twitter shows a leopard pawing repeatedly at a frog, which stands its ground instead of hopping away to safety.

"Times are changing. Unbelievable fight between a frog and leopard. And see who wins," wrote Mr Nanda while sharing the video on Twitter. Watch the video below to find out who came out on top in this one-of-a-kind duel:

Times are changing.....
Unbelievable fight between a frog & leopard. And see who wins????

In the video, the leopard is seen looking down at the feisty green frog and touching it repeatedly with his paw. After tolerating the rude invasion of his personal space the first two times, the frog leaps towards the big cat, who jumps back startled. After that, with one final attempt to snare its prey, the leopard walks away defeated as the little frog looks on, victorious.

Since being posted online, the video has collected over 5,000 views and a ton of amazed comments. Many Twitter users tried to figure out why the leopard decided to spare the frog, with some theorising that it was just playing with its food and soon lost interest.

I have noticed many times that cat family doesnt hunt or eat frogs and they just play with it that too only for few mins .

Doesnt look like an adult leapord. Its still learning the ways of the world.Thats probably why it was trying to figure what that frog was,I suppose.

Some wondered if the frog was poisonous

Could it be because the leopard thought the frog might be poisonous or it was just playing?

As far as I heard some frog species are as venomous as cobra, can kill anyone in moments.

And others took the video as evidence of the fact that size is not everything when it comes to a fight.

According to the National Geographic, leopards have been observed playing with live prey before making a kill, just like house cats who rough up small rodents like mice and rats to practice hunting and protect themselves from injury.