Scroll down to watch the amusing viral videos 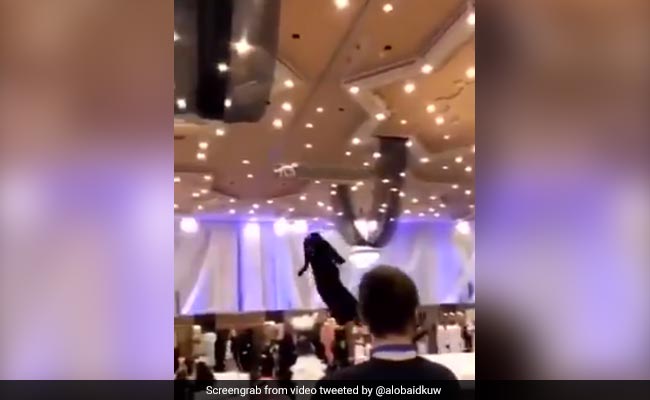 A fashion show where drones replace models? It looks exactly as bizarre as it sounds, as proved by a number of videos currently going viral on social media. At least three separate clips show clothes being flown down a runway - with the help of small drones. Though some Twitterati (and Qatar's The New Arab) claim the fashion show where drones replaced models took place in the conservative Saudi Arabia, there's no conclusive evidence of this. Still, the sight of the drones hovering above the runway is strange enough that it warrants a watch, in our opinion.

The first video, shared on Twitter on June 3, shows a black abaya - the loose, full-sleeved robe-like dress worn by some Muslim women - being flown down a runway by a drone. People on the sidelines watch as the garment flutters past.

Another video shared on June 6 shows a modest green garment hanging on a black hanger, which in turn, is dangling from a drone. There's even a flashy necklace accessorising the look.

In the third video, a strappy printed dress manages to stay on the hanger despite the fast-moving propellers of the small drone. A man - perhaps working with the organisers of the event - walks close to the drone. Most in the audience seem nonplussed at the sight.

There are multiple versions of the three videos circulating on social media - many with thousands of views.

In February, the Italian luxury fashion house Dolce & Gabbana sent drones with handbags flying down the runway. But it wasn't easy to organise the unique fashion show. According to The Cut, guests were asked to switch off the Wi-Fi on their phones to avoid interfering with the drones' signals. After nearly an hour of confusion, the show finally began. But the bold move had social media buzzing with excitement as soon as videos of the drones modelling D&G's quilted handbags made their way online.

Do these viral videos help prove that drones may just be the future of fashion? What do you think? Let us know in the comments section!Click for more trending news