"No one has the right to put their hands on you." 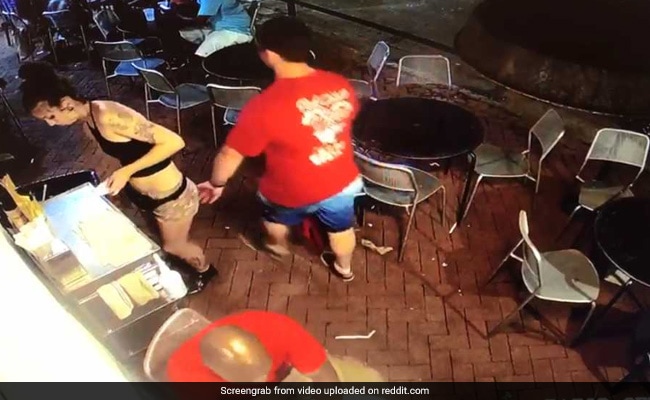 The moment was captured by the restaurant's surveillance footage and circulated widely online.

It was about 11 p.m., an hour before the end of Emelia Holden's waitress shift late last month, when she felt the hand grab her backside.

Holden, 21, had just finished taking a customer's order and placing a stack of menus on an unoccupied table in the small restaurant, Vinnie Van Go-Go's pizzeria in Savannah, Georgia. Suddenly, she felt someone grope her from behind.

At first she thought it might have been her female co-worker, she recalled to local CBS affiliate WTOC. But as she turned around, she saw that it was a customer walking past her, a 31-year-old man police later identified as Ryan Cherwinski, of Palm Bay, Florida.

"I was like nope, that's not going to happen," Holden told WTOC.

It was an experience common to far too many women in the service industry. But Holden wasn't having it.

What happened next was captured by the restaurant's surveillance footage and circulated widely online over the past weekend:

The man takes no more than three steps past Holden before the petite waitress is seen grabbing him by the shirt collar, yanking him backward and hurling him against the wall. As he falls to the ground, Holden is seen pointing a finger at him. The entire time, the video shows, Holden never lets go of the notepad in her left hand.

"It felt a lot longer than it was, but then watching it I realized how quickly I reacted to it," Holden said. "I'm 115 pounds. . .I didn't know I couldn't do that." Cherwinski weighs 175 pounds, WTOC reported, citing a police report.

Holden asked a co-worker to call the police. After speaking to Holden and watching the surveillance footage, the Savannah Police Department arrested Cherwinski, took him into custody and charged him with sexual battery, a police spokeswoman told the Savannah Morning News.

"I was really satisfied when he was arrested," Holden said. "It not only felt like justice for me but justice for the other women who have had that happen."

According to the Associated Press, Cherwinski told police he touched her by "accident." His attorney, Tina Marie Hesse, declined to comment when reached by the AP.

Cherwinski tried to tell Holden that he was simply trying to move her out of the way as he walked past her, she recalled to WTOC. "No, we know what you were doing," Holden said.

The incident happened on June 30. But after one of Holden's relatives posted the surveillance footage on Reddit last week, it spread rapidly across the Internet. A video of the incident on YouTube has been watched more than 4.6 million times.

Viewers praised Holden for her response. An editorial cartoon in the Savannah Morning News titled "You Go-Go, Girl!" depicted Holden pointing at the offender as he lies on the ground. "Wait staff aren't on the menu!" Holden is portrayed as saying. "Creep!"

Women began flooding Holden with messages saying they found the video empowering and inspiring, she told WTOC. Many wrote about their own experiences with sexual harassment and assault while working in the restaurant industry.

"I work there, it was just another Saturday night," one commentator wrote on the Reddit post of the video. "This literally happens ALL the time. We just put the cameras up so this was the first guy we've been able to prosecute."

Freelance journalist Alice Driver wrote an opinion article on CNN about her years working as a waitress during college in Kentucky.

"Had I possessed her confidence at that age, I too would have body-slammed a customer who groped me," Driver wrote. "Although I liked the social nature of my work and eating free desserts on my break, I was acutely aware of how the money I earned was tied to my ability to ignore or laugh at daily sexual harassment, like a man pinching my butt, as the customer did in the viral video of Holden."

Recent studies have shown that women who work in low-wage restaurant jobs are particularly vulnerable to sexual harassment. Jocelyn Frye, who researches women's economic security at the Center for American Progress, a think tank in Washington, found this year that workers in food services and retail filed more than three times as many claims as employees in higher-paying fields of finance and insurance. Frye also found that nearly three-quarters of those filing sexual harassment complaints also reported retaliation.

A 2014 report from the Restaurant Opportunities center also found that two-thirds of female restaurant workers were sexually harassed by restaurant management, 80 percent by their co-workers and 78 percent by customers. A third of women reported that unwanted touching was routine.

While the responses to Holden's actions have been overwhelmingly positive, she has also received significant criticism for the nature of her clothing, a crop top and short shorts, she told WTOC.

"It's upsetting to see people that have that train of thought," Holden said. "It's hot out. I can wear whatever I want. Don't touch me, how about that?"

Driver wrote that Holden "represents the power of the #MeToo era, one in which a woman who is sexually harassed knows instinctively and instantaneously that action - whether it be confronting the groper, reporting him to a boss or trying out a body slam a la Holden - is her right, because her body is not up for grabs anymore."

Holden echoed that sentiment to WTOC. "You have every right to stand up for yourself," she said, "no matter who it is. No one has the right to put their hands on you."

Asked if she has a message for the man who groped her, Holden paused for a moment.

"I got what I wanted when they put him in handcuffs," she said. "Best wishes to your daughters."