"Oh, I can see better than the eye doctor," he says. "I can see 2 miles away now: I don't need glasses except for tiny print. It's amazing now." 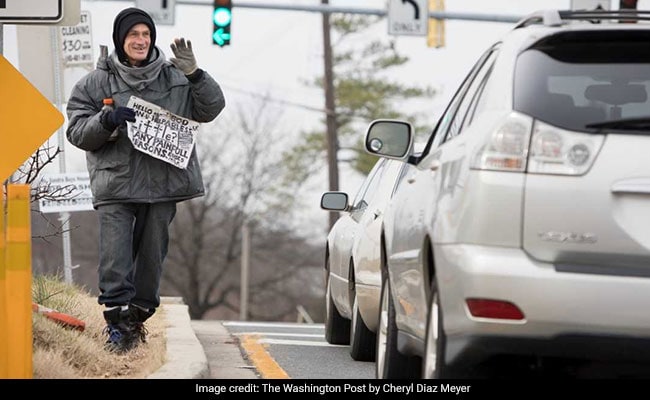 David Voith was living in the woods in Silver Spring, Maryland.

That's what was written on the cardboard sign David Voith would hold as he stood at an embankment along the Hillandale strip mall in Silver Spring, Maryland, waiting for cars to slow.

Sometimes, motorists would hand him a little money. Sometimes, they'd look at his eyes and offer medical advice.

But to Voith, 58, a tall, rangy man with craggy features, the world of doctors and hospitals was a distant land. He had been homeless for nearly 30 years, living for most of it in the nearby woods or in a dank clump of trees in the cloverleaf where the Beltway meets a main surface street.

One day about four years ago, when he was lying in that spot, a slug fell into his left eye and leaked liquid into it. At first, his eye just felt irritated. Then, he began losing vision in it. Then the other eye began to go. Eventually he could see only a gray fog, his eyes shrouded in cataracts likely caused by years of welding and other traumas (and not the slug).

Still, he felt his way each day to his panhandling spot. He had lived in the area since childhood, and his body knew its pathways and parking lots.

But it's hard to grow old in the wild. The "swamphole," as he called his clump of trees, would flood when it rained, soaking his cushions and ruining his possessions. During big snowstorms, he fashioned an igloo around himself and then lay inside as it melted. Sometimes, church people would come by with food.

One night, a year ago, when the temperature had sunk below freezing, someone else came along. Katie Millford, a case manager at EveryMind, a nonprofit mental-wellness organization based in Montgomery County, Maryland, was out doing hypothermia checks, looking to offer coats, blankets or shelter to people sleeping in the open.

Under the trees, she spotted the tarp Voith had set up beside his mound of belongings. She yelled to wake him up and shined a flashlight on herself to show who she was.

But he couldn't see her. And he was wary. Who was this voice in the night, asking his name, inquiring whether he needed anything?

It took a few months of her coming around for him to trust her, and even then, he didn't want help.

"He was very much against housing," Millford said. "He didn't think anyone could help him with anything."

For Voith, it was the hope of seeing again that eventually led him to accept permanent shelter.

That is not atypical, said Christy Respress, executive director of Pathways to Housing, a nonprofit group that helps chronically homeless people with mental health problems in the District of Columbia and Maryland move into their own apartments. The organization also helps people get medical care while they are still living on the streets.

"Often the need for health care is an entree into housing," Respress said. Especially for older adults who remember the days when psychiatric care was a requirement to qualify for permanent housing, she said, accepting medical care carries less stigma.

Voith had many medical needs. At 16, he had started doing sheet-metal work with his father, and he is still proud of the ductwork he did at Baltimore-Washington International Marshall Airport and at the courthouses in Rockville. But after damaging a nerve in his left wrist, he had to stop working. He began picking through dumpsters for scrap metal and decided it was easier to live in the woods than to pay rent.

By the time Millford found him, along with his eyes and his disabled hand, he had back problems, hip problems and long-untreated Lyme disease.

In the spring, he got a Medicaid insurance card. In the summer, he got a photo ID. Voith was still living on the streets in the fall, when a surgeon at MedStar Washington Hospital Center operated, pro bono, on his left eye.

"He said it was the worst cataracts he'd ever seen," Millford said. The doctor told him not to get his hopes up, because the surgery might not work.

But when Voith peeked out from behind the bandage, he found that it had.

The surgery on his right eye, a month later, was also a success.

"Oh, you can see again," the motorists said when they drove up.

"Oh, I can see better than the eye doctor," he told them. "I can see 2 miles away now: I don't need glasses except for tiny print. It's amazing now."

Once the health care got rolling, Voith began opening up to the idea of permanent housing. Millford referred him to Pathways to Housing, which put him on its waitlist, and in October, he moved into an efficiency unit at Cordell Place, a 32-unit apartment building in downtown Bethesda that is owned and operated by the nonprofit Montgomery County Coalition for the Homeless.

Although he said it took him some time to adjust ("I kept going back to the woods for a while"), it has become his permanent home. He still panhandles and dumpster-dives, but now he has a place to keep the treasures he finds - clothing, radios, umbrellas, a bottle of Nivea cream.

"Oh boy, this beats the woods where I was living," he said, sitting on his twin bed topped with a thick mattress. "It's a blessing after 28 years of fighting cold."

He still takes the bus out to his old spot, a block from his old swamphole, to panhandle and sell scrap metal he collects, but he knows that at the end of the day, he can go home. And now that he has housing, he is starting to think about repairing other areas of his life, such as reconnecting with his siblings, mother, and other family he hasn't been in touch with for years.

He also made a couple more adjustments. First, after his surgery, he took out his sign and drew a line through the word "BLIND." That sign wore out, and he has a new one now. It no longer has the word "HOMELESS."