Virat Kohli's expression during the India vs Bangladesh match soon became a meme on Twitter. 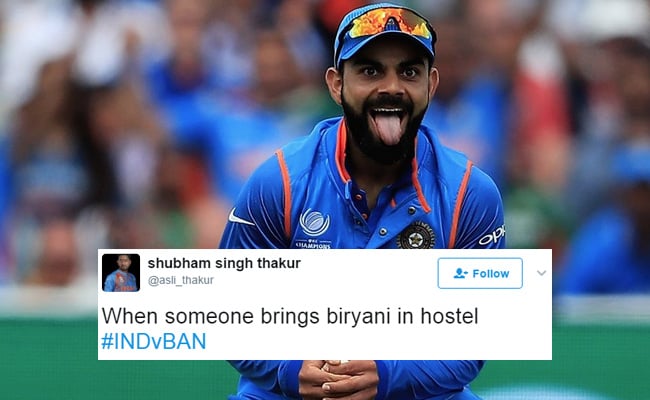 Virat Kohli sticking his tongue out in celebration is definitely meme-material.

Anything and everything that Virat Kohli does is news, but is it all meme-worthy? Well, his hilarious expression during the India vs Bangladesh semi-final of the ICC Champions Trophy today definitely was. After taking a catch to dismiss Bangladesh batsman Mushfiqur Rahim, Kohli celebrated by sticking his tongue out in happiness.

This was so cute, Everytime anyhow you manage to make me fall for you Mr. Kohli #IndvsBanpic.twitter.com/EQX8MyrcVR

An expression, he did not know then, that would very soon become a wonderful meme.

The winning expression of the day #INDvBAN#Kohlipic.twitter.com/Y9XHnL78ad

Kohli's hilarious tongue-out face quickly became a Twitter favourite as people began to think of hilarious captions. In no time at all, the Kohli meme was born.

We compiled some of the funniest memes for you to laugh at. Take a look:

These is the moment we will be enjoying on coming Sunday #INDvBAN#INDvPAKpic.twitter.com/eNd2qy0ITm

When Pakistan ask for champions trophy
Indian players be like :-#INDvBAN#CT17pic.twitter.com/3eGoUrAQU0

When I see Butter Chicken. pic.twitter.com/YbyxsidojK

Your reaction when your elder brother gets scolded by mom for something that you have done. #INDvBANpic.twitter.com/VKi9uOZv7x

To sum it all up:

A moment for #Kohli for being great meme material since forever...#INDvBANpic.twitter.com/ro8w4Ayr76

Which meme is your favourite? Let us know using the comments section below.
Promoted
Listen to the latest songs, only on JioSaavn.com
Click for more trending news