Viral Video: With No Computer, Boy Uses Tablet At Store To Do Homework

12.5 million views for the video 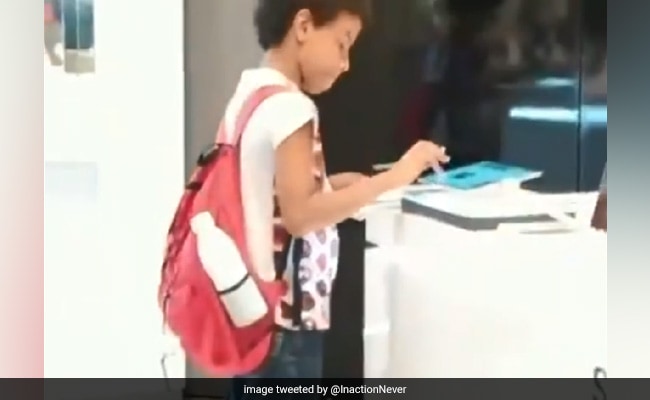 A 10-year-old was seen using a store tablet to complete his homework.

A schoolboy with no computer was recently filmed at an electronic store, using a tablet kept there to complete his homework. The scene was recorded at a shopping mall in Recife, Brazil, and the video originally shared to Imgur. The video went viral after it was re-shared on Twitter, where it has been viewed 12.5 million times.

In the video, the boy is seen with a schoolbag slung over his shoulder, standing inside an electronics store. He appears to be using a tablet kept on the Samsung display kiosk to research while taking notes.

According to news website G1, the boy was identified as 10-year-old Guilherme Santiago. Guilherme had been using his cellphone to study before an employee of the store invited him in.

This child doesn't have internet access at home, so a store in the shopping mall allows him to use their tablet to do homework.

The video has collected over 1.6 lakh retweets and thousands of comments since being shared on Twitter last week. According to one person in the comments section, the video's viral popularity led to Guilherme being presented with three tablets of his own.

this boy is brazilian! he won 3 tablets, in addition to computer and English scholarships, due to the repercussion of the video pic.twitter.com/m4T58wRTvQ

Others in the comments section praised the store employee who invited Guilherme in, while some criticised the school for not having enough computers for students to use. According to G1, Guilherme is a fifth grader at the Abilio Gomes Municipal School, where 278 students make do with 12 tablets.

I love seeing stuff like this, just when you feel like giving up on humanity from all the negative you see n hear, you come across good like this. Feel bad for the lil guy but he's doin what he got to! ????????