Snake viral video: The blue pit viper is an aggressive predator, with venom that can cause severe bleeding. 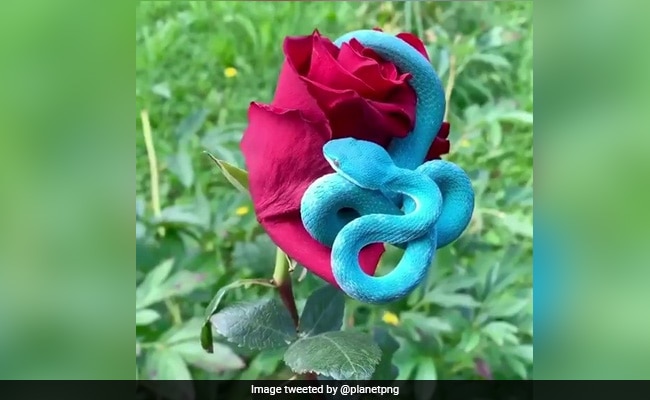 A blue pit viper sits on top of a rose in this viral video.

There aren't many blue snakes in the world, and their rare colouring makes them objects of fascination. One such snake - a blue pit viper - currently has social media's attention. A video of the bright blue snake has gone viral on social media, with thousands of people commenting on its beauty. The blue snake, sitting on a red rose, makes for a striking image in this video which surfaced online recently.

The blue pit viper, however, is not as harmless as it looks. It is, in fact, a deadly snake whose venom can cause severe bleeding, both internally and externally.

"Interestingly, a couple of blue-colour snakes can give birth to green babies. White-lipped pit vipers are viviparous. This means that they give birth to youngsters that are ready to fend for themselves," said Svetlana Akulova, general director of the Moscow Zoo.

Since being posted a day ago, the video has garnered over 52,000 views on the microblogging platform. On Reddit, it has been viewed more than 2.2 million times.

Many social media users agreed that the snake was uncommonly pretty, but cautioned others to stay away from it.

"According to the internet, Blue Pit Vipers are venomous and notoriously aggressive. Whoever is holding that rose isn't playing it very smart," wrote one Reddit user, while another said, "This is terrifying and amazing."

According to the Australian Geographic, blue pit vipers are aggressive predators with a "tendency towards fight over flight." Their venom rarely kills, bit is a 'hemorrhagic' and can cause severe pain, swelling and external as well as internal bleeding.

White-lipped island pit vipers are one of the most common causes of venomous bites in Bali.

Woman Sues Mom's Doctor For Allowing Her To Be Born, Wins Millions