2.3 million views for this snake video. 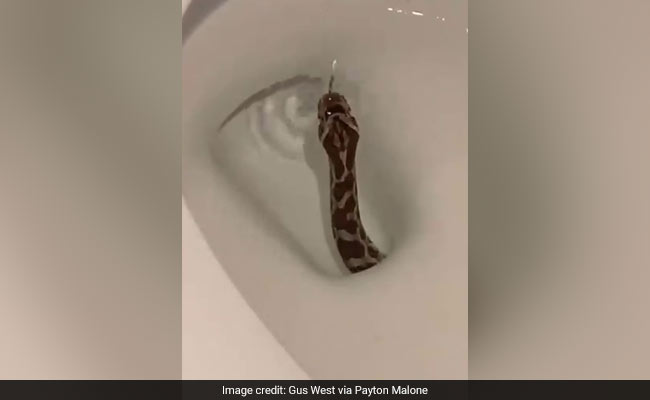 A viral video shows a snake emerging from a toilet.

A video going viral on social media shows a snake emerging from a commode in a scene that many have described as their worst nightmare. The video was shared on social media by US-based meteorologist Payton Malone, who said his friend Gus West had found the snake in his toilet in Texas.

The horrifying clip shared by Mr Malone shows the serpent slithering out from the toilet bowl, its tongue flickering. The video also shows a person trying to coax the snake out with a golf club.

"I always thought this was an irrational fear of mine...apparently not," wrote Mr Malone while sharing the 29-second clip on Twitter, where it has gone viral with over 2.3 million views in two days. "Friend out in west Texas found this," he added.

I always thought this was an irrational fear of mine...apparently not. Friend out in west Texas found this. ???????????? pic.twitter.com/jd23gbLkGF

Since being shared on Twitter this Monday, the video has been viewed over 2.3 million times and collected over 10,000 comments and 'retweets'.

"I live in Houston and everyone always makes sure the toilet lid is always down when not in use. If there's a break in the sewer system, in your own line or the cities lines, they'll come in that way. People are always wondering how snakes get in their homes, this is how," wrote one person in the comments section.

"Nope. Never using a toilet again," another joked, while a third Twitter user remarked: "Throw the whole house away."

Mr Payton told NDTV that the reptile was identified as a non-venomous snake and released safely into the backyard after being captured.