A video is going viral on the internet where the groom can be seen smashing the wedding cake in bride's face out of excitement. 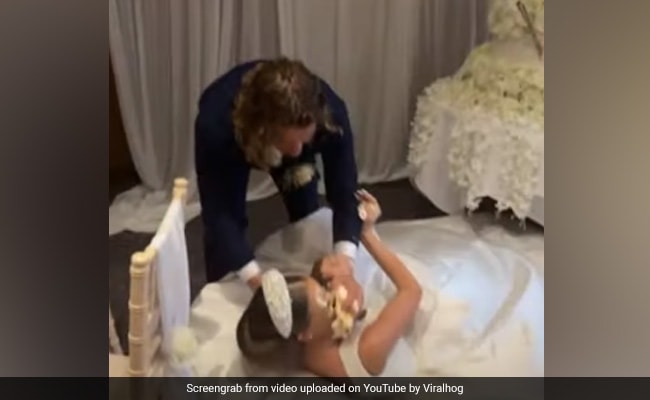 Groom smashes wedding cake on bride's face out of excitement.

Weddings are occasions that bride and groom remember for the rest of their lives. It's the start of a new life for them, where entire families create unforgettable moments.

But a video going viral on the internet shows a moment the bride will like to erase from her memory. In the video, the groom can be seen smashing his wedding cake in her face out of excitement.

The video starts with the bride seen resisting the groom's attempt to smear cake on her face. As the woman falls to the ground while defending herself, the groom then finally smashes the cake in her face.

The bride then gets up and runs after the groom who makes an escape.

The video has been shared by ViralHog with the caption, "Husband smashes cake in my face." According to the post, the incident took place on May 19 in Chester.

The video has been viewed more than 2.2 lakh views and received over 2,000 likes.

People have found the instance unusual and left remarks in the comment section.

“That's not even funny. The bride was humiliated at her happiest moment. What a spoiler that groom was,” a user wrote.

“I'll never understand this. Women usually get their makeup and hair done all nice to look like a princess, why would the groom ruin that for her on their special day,” commented another user.

Wedding videos have been widely circulated on social media. A video of a man destroying a couple's wedding cake went viral last month.

On the day of their wedding ceremony, a newly-wed couple cut the cake, and soon afterwards, a man appeared and destroyed the entire cake in front of them, looking for a way to smash it on the couple's faces.

The video was shared on Instagram by gentlemanspb and it received over 48 million views and more than 4.1 lakh likes.