The deep sea world is breathtakingly magnificent and full of amazing creatures that we humans enjoy seeing and wish to interact with. 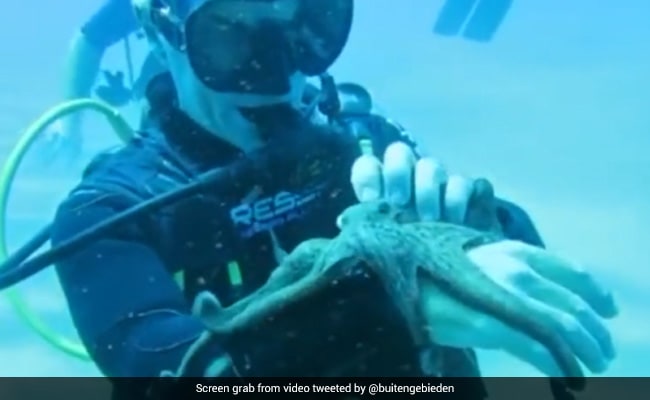 The octopus can be seen softly reclining on the man's fist.

The deep sea world is breathtakingly magnificent and full of amazing creatures that we humans enjoy seeing and wish to interact with. And the most intriguing creature present in the depths of the sea is octopus. Whenever a video of an octopus surfaces, it creates waves on social media. Like the one which shows a scuba diver playing with a small octopus.

The video has been shared by Buitengebieden on Twitter. "Playful tiny octopus. Watch until the end," reads the caption.

The video begins with the diver showing his palm to the octopus, and it diving towards it. The diver does this a couple of times with the octopus hitting the palm with its head. After some time, it realises that this "wall" is impenetrable and begins to leave. That's when the diver gently tugs one of the tentacles to call it towards him.

The octopus can be seen softly reclining on the man's fist, and the diver continues to play with it, caressing its head.

Since being shared, the video has accumulated 1.9 million views and more than 96,000 likes. The post has been re-tweeted more than 13,000 times.

Users appear to be delighted by the entire scene and have made lovely comments in the comment box.

"Octopus gave him a hug!!! I love this," wrote a user while another said, "Octopus got his head rub."

A third user commented, "I think that's the equivalent of an octopus hug."

Recently, a video went viral showed the incredible ability of an octopus to change colours according to its surrounding.

The 23-second video, posted on Twitter by Wonder of Science, showed the octopus wandering across the sea bed and changing the colour of its skin according on the fauna it encountered.

An underwater camera was seen following the mollusk till it stopped on the sea bed and transformed into a seashell-like structure. The video was credited to Nick Ruberg and viewed more than 1.5 million times. Originally posted by ViralHog on 2016, the video went viral again.