Read inOther Languages
This Article is From Oct 28, 2020

Viral Video: YouTuber Burns Down His Mercedes Out Of Frustration

Over 11 million views for this shocking video of a YouTuber burning down his Mercedes-AMG GT 63 S. 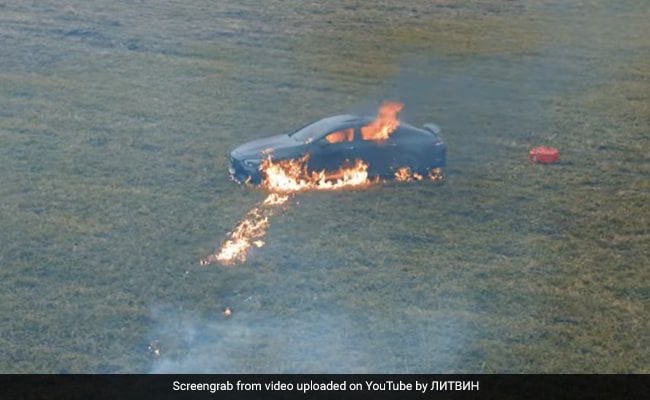 Mikhail Litvin set his Mercedes on fire in an empty field.

A YouTuber has stunned millions of viewers by burning down his Mercedes. According to Motor1.com, Mikhail Litvin is a Russian blogger who set his luxury vehicle on fire in the middle of an empty field after facing constant issues with it.

His Mercedes-AMG GT 63 S, worth Rs 2.4 crore, reportedly broke down several times after he purchased it from an official dealership. The YouTuber sent it back to the Mercedes dealer five times - but each time the repairs did not help. All in all, the car spent more than 40 days in repair, and in one of the services, the turbine was changed with a new one being ordered from Germany, reports local website VC.ru.

After the latest breakdown, the dealership stopped answering his calls. Mikhail Litvin - who is also known as Misha - then decided to set the car on fire as a form of protest. A video that appeared on his YouTube channel four days ago shows him setting the Mercedes on fire in the middle of an empty field.

He was filmed dousing the luxury vehicle in gasoline before setting it on fire with a lighter.

"I thought for a long time what to do with my Shark after the conflict with Mercedes ... In my opinion, the idea is FIRE!" he wrote while sharing the video. "I am not happy," he added.

The shocking footage has been viewed more than 11 million times on YouTube, where Mikhail has nearly 5 million subscribers. Several people were left aghast by the bizarre and dangerous stunt.

"How could you?" asked one person in the comments section.