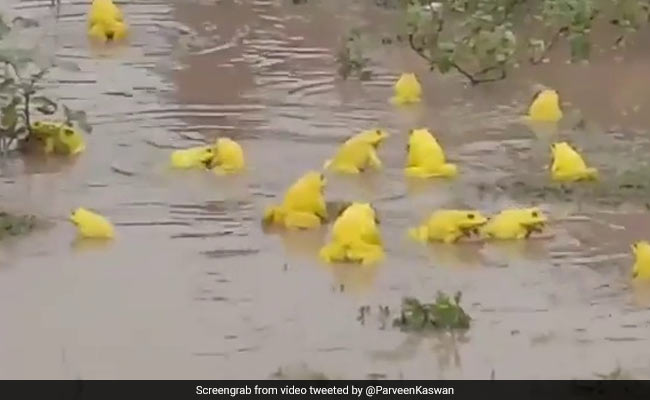 A large group of yellow frogs was spotted in Madhya Pradesh.

The curious sight of an army of bright yellow frogs has captured Twitter's attention of late. A video of the yellow bullfrogs was shared on the microblogging platform by Indian Forest Service officer Parveen Kaswan, who said that it was taken in the city of Narsighpur in Madhya Pradesh. The 31-second clip shows a large group of lemon yellow frogs hopping around in a small pond.

"Have you ever seen yellow frogs... They are Indian bullfrog seen at Narsighpur," wrote Mr Kaswan while sharing the video. Mr Kaswan also shared the reason behind their bright colouring. He explained that male bullfrogs, which are actually a dull olive green colour, change hues during the mating season to attract females. Take a look at his video below:

Have you ever seen Yellow frogs. Also in this number. They are Indian #bullfrog seen at Narsighpur. They change to yellow during monsoon & for attracting the females. Just look how they are enjoying rains. @DDNewslivepic.twitter.com/Z3Z31CmP0b

Since being shared on Twitter one day ago, the sight of the bright yellow frogs has captivated many, collecting over 1.8 lakh views and more than 10,000 'likes'. A look at some of the intrigued comments they collected:

No. They are not. People eat them.

They can be seen in Andhra too. Legend says that these frogs fall from sky along with rain...????????

Yes..I have seen in my in-laws place in Balasore..same kind of Yellow frog..???? pic.twitter.com/KoUj5mjDoe

According to science website ZME Science, the Indian bullfrog changes colour drastically during mating season in monsoons. While the frogs turn bright yellow from a dull green, their vocal sacks turn blue. It is believed that the more brightly-coloured a male frog is, the more attractive it is considered.

According to Daily Mail, Indian bullfrogs can be found in Afghanistan, Bangladesh, Myanmar, Nepal, Pakistan and Sri Lanka besides India. They prefer freshwater wetlands and aquatic habitats, staying away from coastal areas. These nocturnal frogs are considered to be an invasive species in the Andaman islands.