Over 1.7 million views for the video 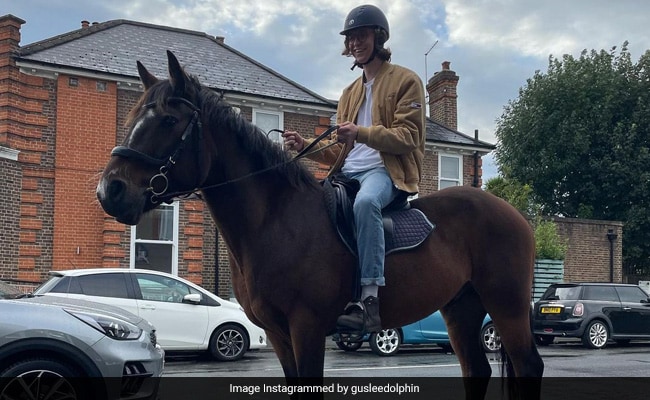 British petrol stations are still seeing unprecedented demand with more than two thousand pumps still dry on Thursday amid the country's fuel crisis, according to news agency Reuters. In a chaotic week where fights broke out at gas stations and people filled up old water bottles with petrol, one man was filmed riding up to a petrol station on a horse. Gus Lee-Dolphin found an old-school solution to the fuel crisis and turned heads as he rode up to a Shell petrol pump on horseback in west London, reports the Independent.

Footage that has gone viral online shows the prankster riding a chestnut horse to mock drivers waiting in long queues to get fuel.

The video, which Gus shared on Instagram yesterday, went viral after it was reposted by a popular Instagram meme page.

The video has collected over 1.7 million views and hundreds of amused comments on Instagram. It has also gone viral on TikTok with over 5 million views.

"How much horse power he got?" one Instagram user asked.

"Brexit is the best entertainment I have seen in years," said another.

"People are gonna start panic buying carrots now," a commenter joked, while many asked if the horse-rider was the same person who was seen riding his cycle to a gas station last week.

In fact, Gus Lee-Dolphin had indeed driven his bike to the gas station in another light-hearted prank last week.

He later also shared a picture which shows him on the horse, declaring that he had never ridden one before.

Britain said on Thursday that a gas station crisis caused by an acute shortage of truck drivers was back under control but many pumps remained closed in London leaving motorists searching or queuing for hours to fill their tanks. British ministers have repeatedly said the crisis is easing though they ordered soldiers on Wednesday to start driving fuel tankers.

The gas station crisis has provoked scorn in some other European capitals with senior politicians suggesting that the trucker shortage was a clear consequence of the 2016 referendum decision to leave the European Union.