Viral Video: Man Narrowly Avoids Getting Hit By Train That Crushed His Bike 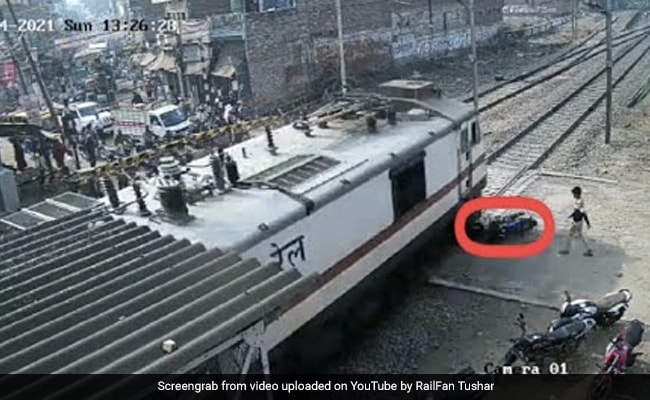 A motorcycle was seen getting crushed by the force of a train's impact.

A motorcyclist in Uttar Pradesh managed to narrowly avoid getting hit by a train. His motorcycle wasn't as lucky - it was seen getting crushed by the force of the train's impact in a video that has gone massively viral online.

Hair-raising footage that has emerged from Bharwari shows a biker's attempt to cross a railway crossing ending in disaster. He reportedly tried to drive across the tracks even as security gates had been closed. However, CCTV footage shows his motorcycle getting stuck near the tracks, forcing him to abandon the vehicle and flee as the train came closer.

The motorcycle was seen getting completely crushed as the train rammed into it, sending pieces flying into the air.

The footage has been viewed tens of thousands of times across different social media platforms. Viewers were largely critical of the driver, who was identified by Hindi news website Live Hindustan as 24-year-old Shahid Ali.

"He deserves it," wrote one person in the comments section.

"Railways should file case against him for threatening life of passengers," said another.

Mr Ali reportedly tried to flee the scene. He was later apprehended and a case has been registered against him.