Viral Video: Elephants Save Calf That Fell Into Pool Of Water

A video is going viral on social media that shows a elephants trying to save their calf drowning in a pool. 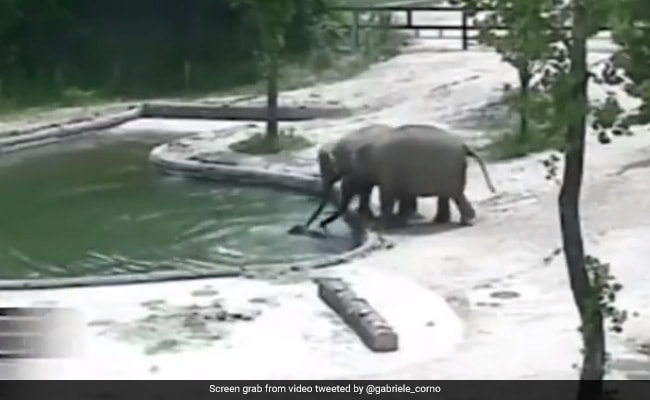 A child is the greatest treasure of their parents, whether they are human or animal. Parents will do whatever it takes to save their children if the child is in danger. One video is going viral on social media that shows a elephants trying to save their calf drowning in a pool.

Shared by a user named Gabriele Corno on Twitter on Saturday, the video begins with a mother and a baby elephant drinking water from a pool. Suddenly, the baby elephant plunges into the water.

According to the post, the video has been captured at Seoul Park.

Another elephant arrives to assist the mother and her calf. The two adult elephants work together to save the baby elephant as it tries to keep its trunk above the water.

Behind the fence, a third elephant can be seen walking furiously and in despair as it tries to reach the other two elephants to assist them in rescuing the young elephant.

They may be seen entering the water and moving the calf in the direction of the shallow area. The baby elephant's life was rescued by their quick thinking. The video demonstrates how kind elephants can be.

Since being shared, the video has received over 6.7 lakh views and more than 34,000 likes. Thousands of users have retweeted the post and there are numerous beautiful remarks in the comment section of the post.

"These things feel deeply," wrote a user, while another said, "And how smart! Bravo, Babars!"

A third user wrote, "This is how children need to be protected! Animals are far superior to humans. They see the threat and they take action. Whereas people would stop to take some video and pics," while sharing the post.