Viral Video: Elephant Knocks Entire Tree Down To Scratch Its Itchy Back, Internet In Splits

A wild elephant was seen knocking down an entire tree just so he could scratch his itching back. 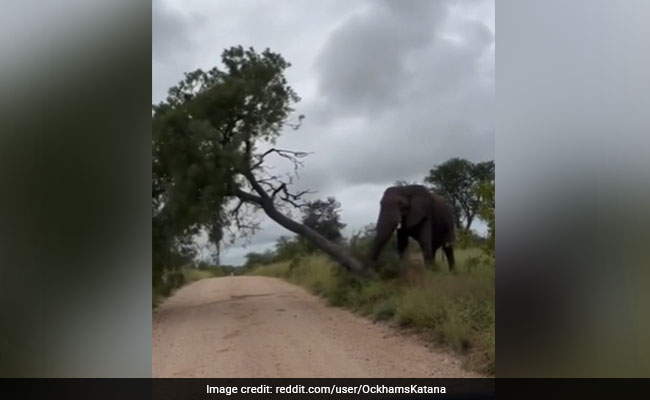 The giant tusker knocks the tree down and then rubs itself against the fallen tree.

Elephants are exceptionally intelligent animals, capable of experiencing and understanding a wide range of emotions. From seeding forests, to digging up water holes to ensure the wildlife population has a drinking source, these majestic animals are the pillars that sustain many a ecosystems. However, at times they can also be quite silly and come across as destructive. In a video going viral on Reddit, a wild elephant was seen knocking down an entire tree just so he could scratch its itching back. We sure can relate to that! The 17-second-long clip has clocked over 2,400 likes on Reddit and left users in splits.

The video was posted by a user OckhamsKatana, and the caption of the video reads, ''Needed that scratch so badly''.

In the clip, the wild elephant is seen standing next to what appears to be a savannah tree. Seconds later, the giant tusker knocks it down and then rubs itself against the fallen tree to scratch that itch. The video was probably recorded by a tourist visiting a safari park.

The video has accumulated tons of amused reactions. One user wrote, "That tree grew in that spot for 80 years fighting drought and infestations only to be knocked over, killed, and used for an ass-scratcher. The indignity.'' Another noted that such behaviour is quite common. He commented, "Not done for a "scratch". Elephants routinely knock trees over and eat the roots. Go on a safari. It's worth every penny.''

A third drew a comparison between humans and elephants, saying, "Humans literally destroy whole forests and make hundreds of species go extinct each decade to fulfill consumerist whims. Humans have hunted tigers and rhinos almost to extinction just to collect some of their body parts. Humans are by far the worst.''

The location where this incident took place is yet to be known.