The video shows a teenager, Aprameya Seshadri from Bengaluru, playing the song on a flute while the other passengers are in awe of him. 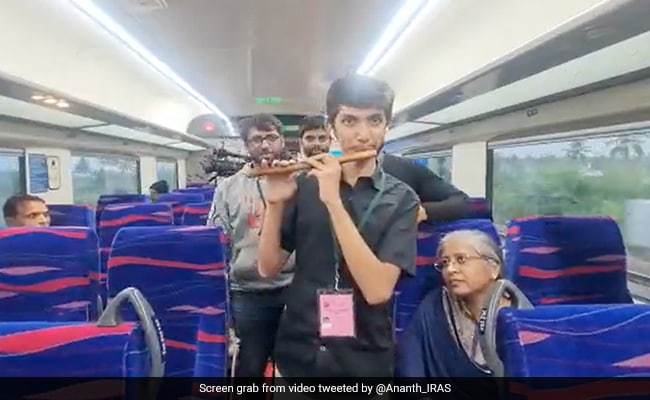 Prime Minister Narendra Modi flagged off the Chennai-Mysuru Vande Bharat Express at Kranthiveera Sangolli Rayanna (KSR) Railway Station in Bengaluru on November 11. This is the first such train in south India. Now, a video of a student performing the famous patriotic song 'Vande Mataram' on the newly inaugurated train has gone viral on the internet.

The video was shared by railway official Ananth Rupanagudi on Twitter and has garnered a lot of love. The video shows a teenager, Aprameya Seshadri from Bengaluru, playing the song on a flute while the other passengers are in awe of him. A few passengers appear seated in the newly inaugurated train while others are standing behind the young artist. It seems that the video was recorded by a co-passenger.

The 47-second clip has been captioned as, "Aprameya Seshadri, a 12th student from Bengaluru, playing the wonderful Vande Mataram tune on the flute! #IndianRailways #VandeBharatTrain #VandeBharat"

Since being shared, the video has amassed over 5,800 views and 400 likes. "Wonderful!! #vandebharath," said one user. "Nice !" commented another user.

Some users questioned the officer on why people were seen wearing tags. He asked, "What are these tags travellers wearing sir ? Selected travellers for inaugural run?" To which, the official replied, "The passes given to them for travel on the train."

Other users also appreciated the newly-launched Vande Bharat Express trains of the government. "Sir I love this Vande Bharat initiative. It gives a modern look to our trains. But I don't see how it's a significant improvement on the already existing Shatabdis. It seems flashy but even the seats aren't as comfortable as normal ac chair cars in shatabdis," added an internet user.

A second said, "The aesthetics of the chair car does not look bad at all."