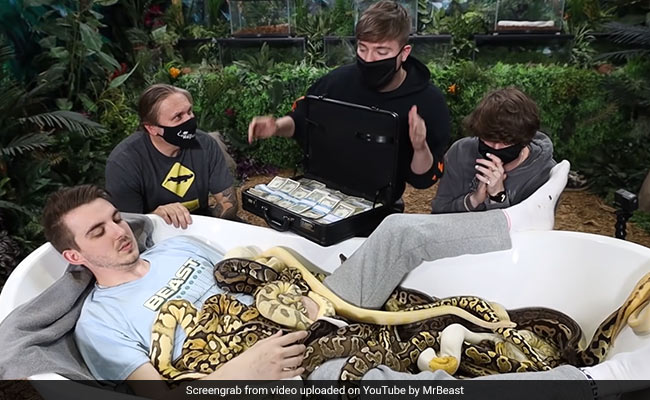 Watch how many people agreed to sit in a bathtub full of snakes for a cash reward.

Popular YouTuber MrBeast is back with another crazy video - and this time, he had cash rewards up for grabs. MrBeast - real name Jimmy Donaldson - challenged friends and colleagues to compete in a series of increasingly bizarre stunts to win prize money. The challenges involved sitting in a bathtub full of snakes, letting a tarantula crawl on you for 30 seconds and grabbing banknotes from a container with giant cockroaches, among other things.

In the YouTube video posted this Sunday, Mr Donaldson, 22, gave away tens of thousands of dollars to people who managed to win the challenges he set up. For his first challenge, he told three friends that he would give $10,000 (approximately Rs 7.5 lakh) to their mothers if they agreed to sit in a tub full of snakes.

"Would You Sit In Snakes For $10,000?" he titled the video. Watch it below to find out how many people agreed to take part in these crazy challenges and how many managed to win:

Since being posted two days ago, the video has racked up a whopping 27 million views, along with thousands of comments.

"You are such an amazing person," wrote one person in the comments section.

"Jimmy and the Beast team have now officially became the greatest content creators of our era and you can't change my mind," another said.

The MrBeast YouTube channel boasts of over 59 million subscribers. Mr Donaldson owes his viral fame to the success of a 2017 YouTube video titled video "I COUNTED TO 100000!", which eclipsed over 20 million views.