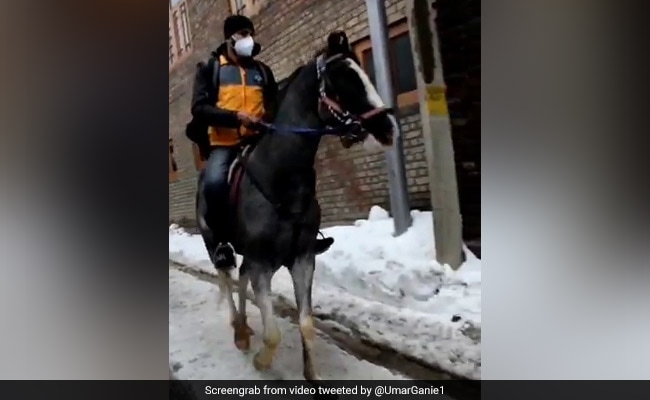 A viral video shows a delivery person riding a horse to deliver packages.

As snowfall disrupted flight operations and vehicular traffic in Srinagar and other parts of Kashmir, one determined Amazon delivery executive was seen riding a horse to drop off orders. A video that has gone viral on social media shows the unidentified man delivering parcels on horseback in Srinagar.

Footage of the delivery person surfaced on social media yesterday and has since been viewed thousands of times across Facebook and Twitter. In the video, the Amazon delivery person is seen riding his horse through a snow-covered street before dismounting to hand over a parcel to a customer.

"Amazon delivery innovation," wrote one Twitter user while sharing the one minute-long clip on the microblogging platform.

While dozens of people applauded the delivery man for going the extra mile to do his job, Amazon also took note of the viral video. Here is what the company's customer service account tweeted in response to the clip:

"This guy deserves appreciation," wrote one Twitter user. "Salute to the rider and the horse," another said. Many Twitter users also tagged Amazon CEO Jeff Bezos to bring the video to his notice.

Non-stop snowfall in Jammu and Kashmir over the last week cut off parts of the Union Territory - particularly the Kashmir Valley - from the rest of the world. Air traffic between Kashmir and the rest of the country was restored on Thursday after four days. However, fresh snowfall over the weekend led to several flights being cancelled or delayed.