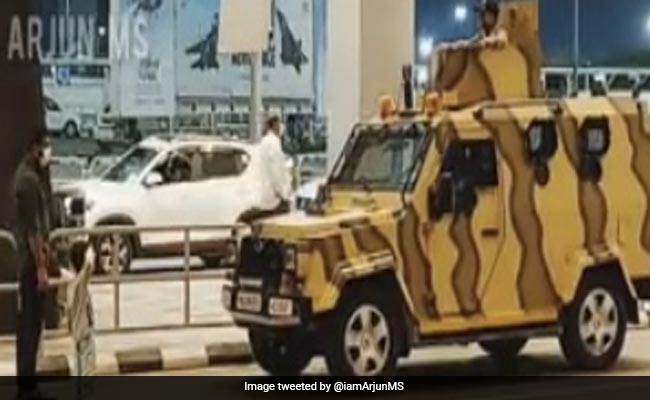 A four-year-old salutes a CISF personnel at Bengaluru airport.

A heartwarming video shows a little boy saluting a Central Industrial Security Force or CISF personnel at Karnataka's Bengaluru airport. Four-year-old Veer Arjun was walking hand in hand with his father towards the airport when he noticed the CISF jawan on duty. The young boy paused, turned to face the jawan and raised his hand in salute, footage that has gone viral on social media shows. In response, the CISF personnel, who was filmed standing inside a vehicle, raised his own hand to salute the boy with a smile on his face.

The video went viral after it was shared on Twitter by Veer's father, Arjun MS. Mr Arjun told NDTV that the video was filmed by the boy's mother on October 18 at Bangalore airport.

On Sunday, Union Minister Rajeev Chandrasekhar re-posted the video as he praised the four-year-old. "At #Bengaluru airport - a young Indian snaps off a salute to our men in uniform. Respect and patriotism is learnt young," he wrote, adding the hashtags #Respect and #JaiHind.

Since being posted on the microblogging platform, the video has racked up over 4.3 lakh views and hundreds of comments applauding the young boy.

One Twitter user said the video was "overwhelming" on many levels

Overwhelming on so many levels.
That kid awed before saluting,
the uniformed man giving an absolutely respectful reply to the kid.
The father showing appreciation as positive reinforcement to his kid.
Watched a few times.

Look at driver seat, he also responded with selute

Wonderful ... it is often said 'you've got to catch them young'

Cant take my eyes off from this lil champ and his gesture towards our men who protect us respect to the parents who is raising him right jai hind????????