Kelvin-Helmholtz clouds are rare, and not usually this well-defined 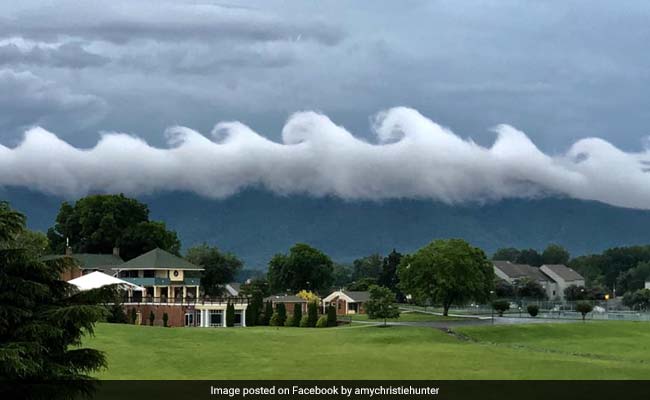 This picture of the wave-shaped clouds has gone viral online.

A picture of magnificent cloud waves in the sky has gone viral on the Internet, and people can't stop marvelling at it. The picture, clicked in Virginia's Lake Smith Mountain on Tuesday evening, shows the rare cloud formation above green fields, making for a stunning capture. The rare wave-shaped clouds, known as Kelvin-Helmholtz instability waves, were spotted and photographed by Amy Christie Hunter, who later shared the picture on Facebook.

"Very cool clouds rolling over the mountain tops at Smith Mountain Lake this evening," wrote Amy while sharing the picture. "They are called Kelvin-Helmholtz clouds. I sent the photo to our local news station and the meteorologist replied to me saying they are very rare and usually not this defined."

The picture went viral after it was shared online. On Facebook, it has collected over 600 'shares' and a ton of comments.

"That is so beautiful!" wrote one person in the comments section. "Wow they look like a painting," said another.

According to WDBJ 7, these ocean-wave-like clouds are typically formed when there are unstable conditions in the atmosphere. Kelvin-Helmholtz instability clouds occur when there is a difference in wind speed between two layers of air, and don't usually last too long.