Viral Pic Of Giant Mosquito That Is Freaking Netizens Out

"Look at the size of the mosquito that just came in through my window," wrote the Twitter user who shared the photo. 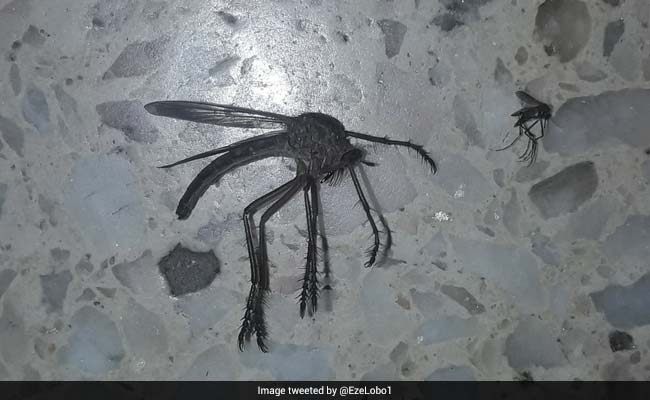 A picture going viral on Twitter shows an extra-big bug.

If you are scared of creepy-crawlies, this pic may give you goosebumps. A picture going viral online shows a supersized bug that appears to be right out of a horror movie. Ezequiel Lobo, a man from Argentina, shared the photo on Twitter last week, where it has left many stunned.

Mr Lobo's photograph shows the huge mosquito lying next to a normal-sized one for comparison. "Look at the size of the mosquito that just came in through my window," he wrote, according to a translation by Daily Mail.

"He came in like a champion, my mother panicked and sprayed it with Raid. I haven't found anything similar online. Either it's Chernobyl's new evolution or I just found out that I am in Jumanji."

The photo was clicked in the city of Cordoba.

The picture has collected over 1.3 lakh 'likes' and thousands of comments.

"That's terrifying. Looks like a pre-historic mosquito," wrote one person in response to the photograph. Another simply said "noooo".

I think it's a mosquito called psorophora ciliata. They say its bite can be very painful and it is quite aggressive. pic.twitter.com/HQvjEmtEep

Some others, however, said that it could be a robber fly.

Insect expert Michael H Reiskind told Daily Mail that psorophora ciliata usually appear after flooding. Their bite can be painful, but they do not usually carry diseases.