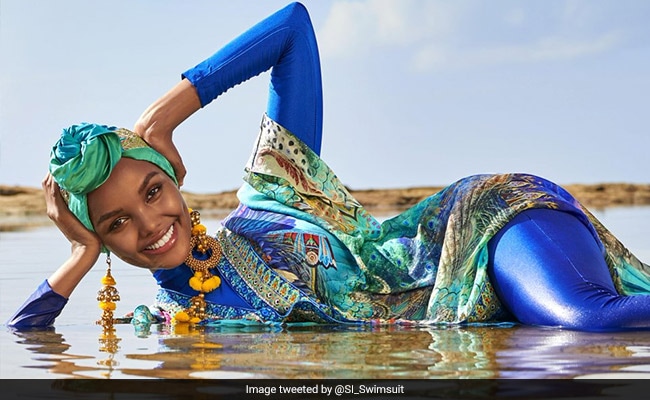 Somali-American model Halima Aden has made history by becoming the first model to wear a hijab and burkini for the Sports Illustrated magazine's annual swimsuit issue. The upcoming May issue of the magazine features the 21-year-old model, wearing a burkini (a full body swimsuit) and a hijab. This is especially significant for a magazine which has, for decades, chosen bikini-clad models for its famous swimsuit issues, reports the New York Times.

Halima Aden makes history as the first model to wear a hijab and burkini for Sports Illustrated Swimsuit: https://t.co/8WFD4hHmiH. pic.twitter.com/OsBthnjoLY

Halima Aden spoke about how much the photoshoot meant to her in an interview with Sports Illustrated. "Growing up in the States, I never felt represented, because I could never flip through a magazine and see a girl who was wearing a hijab," she said.

“I never really felt represented, because I never could flip through a magazine and see a girl who was wearing a hijab.” @halima #shatteringperceptions #SISwim • • • @hemingwayscollection @officialkenyaairways #HemingwaysWatamu #LetKQTakeYouThere

Born in Kenya, where she lived in a refugee camp, Ms Aden moved to Minnesota at the age of seven. In 2016, she became the first participant to wear a hijab at the Miss Minnesota USA pageant.

"I keep thinking back to six-year-old me who, in this same country, was in a refugee camp," Ms Aden said during her shoot, according to Sports Illustrated. "So to grow up to live the American dream and to come back to Kenya and shoot for SI in the most beautiful parts of Kenya - I don't think that's a story that anybody could make up."

In an interview to Good Morning America, she succinctly summed up why her hijab and burkini photoshoot has made headlines around the world and is being hailed as an important step in the right direction. "Sports Illustrated is proving that a girl that's wearing a bikini could be right alongside a girl that's wearing a burkini. And as women we can come alongside each other and be each other's biggest cheerleaders," she said.