Job Ad For Graphics Designer Is Viral. It's So Bad, It's Good

If you think the ad is funny, scroll down to see some of the applications 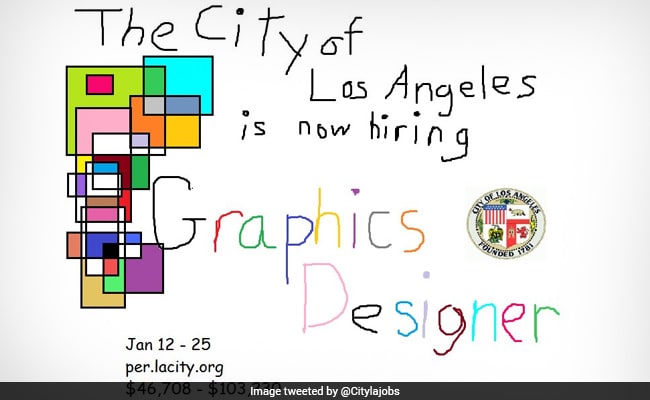 The advertisement was posted on Twitter by city of Los Angeles

A hilarious but impressive job advertisement by the city of Los Angeles has creating some buzz on Twitter. Made with Microsoft's Paint tool, the ad looks like a sketch by a kid and has amused many online with its 90s-esque appeal. The job posting for the role of a graphic designer features the seal of Los Angeles along with a very primitive-looking mosaic and some cringeworthy scrawling done with a mouse.

"The city of Los Angeles is now hiring Graphics Designer," reads the ad. Along with it, details of the role like the salary package and the last date to apply written in Internet's most-hated font - Comic Sans.

Promoted
Listen to the latest songs, only on JioSaavn.com
Posted some 48 hours before writing this, the ad has over 29,000 retweets and over 71,000 favourites. On Facebook too, the job ad had over 17,000 shares. One look at the cheeky advert will tell you why so many were drawn to it.

The amateur-looking yet effective job ad did its work rather well as it attracted many potential jobseekers. But mostly, Twitter had a good laugh about how efficiently it conveyed the point that the city desperately needed a graphic designer.

It was an amusing ad until I saw the Comic Sans. Too far.

You could've use this. pic.twitter.com/arLSr7wete

plz help. this is their current designer. pic.twitter.com/mI6zyOV20a

The government website says the job requires the designer to prepare ads, posters, pamphlets for publicity, informational and promotional purposes. Hopefully, the chosen candidate will do a better job at ads than the existing one.

What do you think of the ad? Let us know in the comments section below.Click for more trending news