Viral: In Kerala, 18 Dogs And Their Owner Rescued From Flooded House

The team rescued the dogs from neck deep water 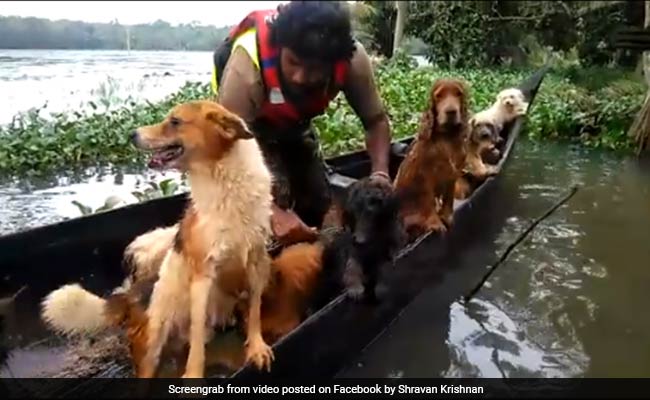 The owner and her dogs have been moved to a safe place.

As rescue operations continue in flood-hit Kerala, several stories of selfless support and humanity have come to light. Among them is this story of how 18 dogs and their owner were rescued by a team of activists from Chennai. A Facebook, accompanied by pictures and videos, details the rescue operation and is now going viral.

According to the post, shared by Facebook user Shravan Krishnan yesterday, the owner of the dogs, a woman, was likely a backyard breeder and hoarder. She lived next to the backwaters and her house had water up to 10 feet. "The team had to take a boat in and rescue these animals from neck deep water," says the post. Pictures and clips shared show some dogs in cages while some sat on different household items away from the water.

The entire operation took about two hours. The owner and her dogs have been moved to a safe place.

Take a look at the rescue operation below:

Since being shared, the post has collected over 48,000 shares and more than 22,000 reactions. Many on Facebook are moved by the rescue team's efforts.

"God bless the rescue team. Hats off to you guys you all are a blessings to these fur babies," says one Facebook user. "Commendable job my brothers," says another.

A similar rescue story that has gone viral, details how a woman in Thrissur refused to leave her home unless her 25 dogs were rescued too.

Kerala has been ravaged by the worst floods in a century. Over 160 people have died and thousands have been displaced or stranded in the Kerala flood. Hundreds of thousands have been shifted to relief camps as rescue operations continue in the state.