"Wally" The Celebrity Walrus Swims 4,000 km, Turns Up In Iceland

The popular walrus named Wally was found in Iceland after being missing for almost a month. 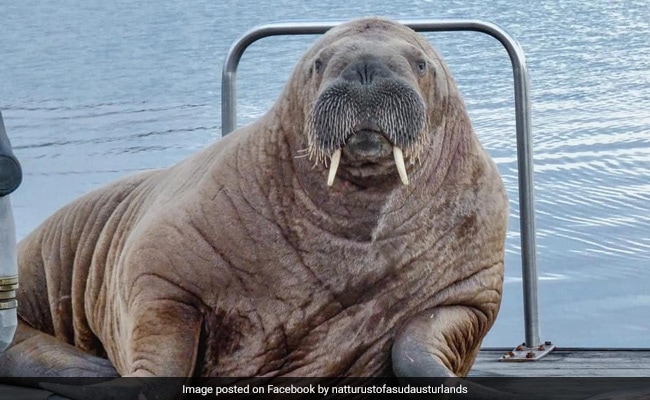 One of the most famous walruses of the world, Wally, has been rediscovered. Wally the walrus was feared to be dead after it went missing for 22 days. The arctic mammal weighing 800 kg was spotted in Iceland on Sunday. A recently surfaced Facebook video shows the walrus crawling on the floating deck and taking a leap into the water. The popular walrus was last seen in Seal Rescue Ireland, a location that is 900 km away from Iceland. It is called a wandering walrus due to its unique quality of travelling the world before settling back in its home, which is the Arctic area.

Twitter account Seal Rescue Ireland posted an update that read, “After 22 days with no confirmed sightings, we were starting to lose hope of ever seeing the young, wandering walrus again. However, we just received notice that a similar-looking walrus was sighted yesterday in Iceland.”

#WalrusWatch UPDATE: After 22 days with no confirmed sightings, we were starting to lose hope of ever seeing the young, wandering walrus again. HOWEVER, we just received notice that a similar-looking walrus was sighted yesterday in ICELAND..
Picture: Hafrún Eiríks / Höfn 1/7 pic.twitter.com/ZQLwGtbVol

The walrus toured all through the summer to France, Spain and the Isles of Scilly as reported in the Dailymail UK. The British Divers Marine Life have confirmed the walrus to be Wally after comparing photographs and scars, reported the publication.

The mammal is said to travel approximately 4,000km to reach Ireland, as noted in BBC. Wally travelled for more than 900 kms from West Cork. Here's the video of Wally the Walrus jumping back in the sea to finally head towards its home.

The walrus was named as Wally first by a photographer and safari guide named Nathaniel Barry. He first mistook the walrus as a seal in a quick glimpse but later identified it as a walrus. The authorities at Pembrokeshire opine that the tourists, surfers and onlookers are responsible for Wally the walrus to head far away from its icy home. Nevertheless, hopefully, the travelling walrus will be able to find the comfort of his place very soon.