Footage from two separate CCTV cameras shows the moment an unsuspecting pedestrian disappears into a sinkhole. 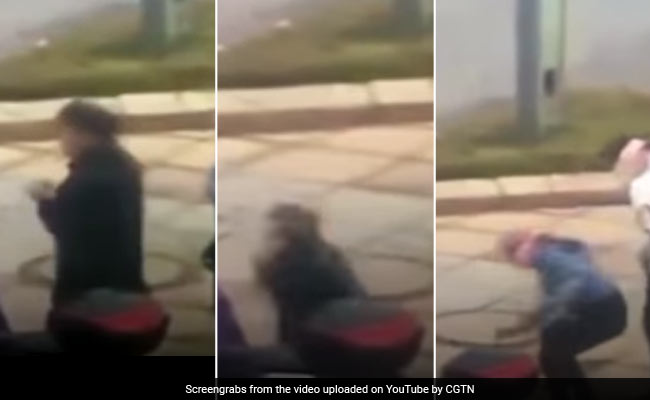 Caught on camera: The shocking moment a pedestrian briefly disappears from sight as a footpath caves in

Shocking surveillance footage captures the exact moment a man plunges into a sinkhole that opens beneath his feet on a paved footpath on Thursday in southeastern China.

Footage from two separate CCTV cameras shows the moment an unsuspecting pedestrian disappears into the sinkhole in Jiangxi Province's Nanchang.

Video posted online shows the pedestrian, who was with three friends on the footpath, getting ready to cross the road. Suddenly, the man disappears from sight as the footpath caves in. His friends are left stunned. A number of passersby rush over to offer assistance as the victim's shocked friends reach out to help him out of the sinkhole.

According to CGTN, a number of paving stones gave way, sending him plunging into the sinkhole.

Watch the shocking CCTV footage below:


In October, a Rolls-Royce Phantom car plunged head-first into a six-foot-deep sinkhole in the middle of a road. The incident took place in Harbin, the capital city of China's northeastern Heilongjiang province.

Though the owner of the luxury car managed to escape unharmed, the Rolls-Royce Rolls-Royce was worth about 5 million yuan, or Rs. 5 crore, was left damaged.Click for more trending news