Read inOther Languages
This Article is From Sep 09, 2020

The bride says she was trying to break up an argument among a group of strangers. 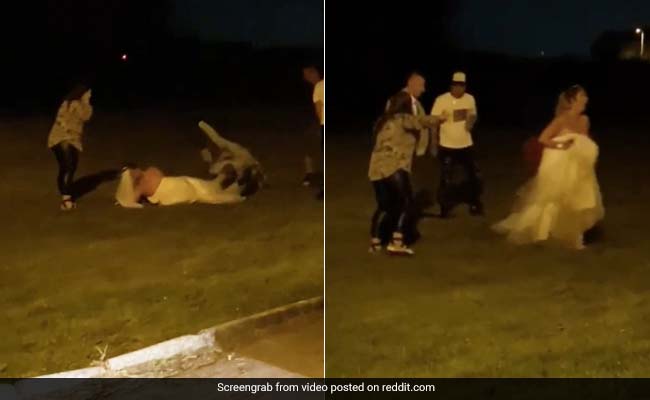 A video that is going viral shows a bride, Zoe Dallimore, fighting in her wedding dress.

A Welsh bride was filmed brawling with an unidentified man in a startling video doing the rounds of the Internet. According to Fox News, the altercation took place at a rugby club in Swansea, south Wales. The bride, Zoe Dallimore, was still dressed in her white wedding dress and veil as she appeared to tackle the man to the ground in a playing field. The fight occurred shortly after her wedding to now-husband David on Friday.

A video of the fight was posted to Reddit on Sunday, where it has since gone viral with a ton of stunned comments and reactions.

Nothing like a good old punch up to end your wedding day. from r/trashy

However, in an interview with The Sun, Ms Dallimore, 31, claimed that she did not throw or receive any punches and was, in fact, just trying to break up a fight among a group of strangers.

"We decided to walk because we only live 10 minutes away from where we had the reception at Penlan Rugby Club," she said.

"As we were leaving, a small group of people outside the club were having an argument. I still don't know who they were or what they were quarrelling about but I didn't want anything to spoil our great day so I walked over and told them to calm down.

"I said very politely: 'It's my wedding and I don't want you to spoil it by arguing so please calm down and break it up now.'"

Even though the video shows her brawling on the ground, Ms Dallimore said "I didn't throw any punches or get punched."

Asked about the woman who appeared to be lying unconscious on the ground at the beginning of the video, the newlywed said that the woman was a friend. "One of our friends did fall to the ground because she'd had a bit to drink and the velcro strap on her shoe got caught, but she wasn't fighting either," she said.

The rugby club where the couple hosted their reception issued a statement after the fight video went viral.

"We are aware of a video being circulated from last night at the club, after a wedding party ended there was a fight outside the club," the club wrote. "The club staff phoned the police and had the people removed & the injured people got attention."