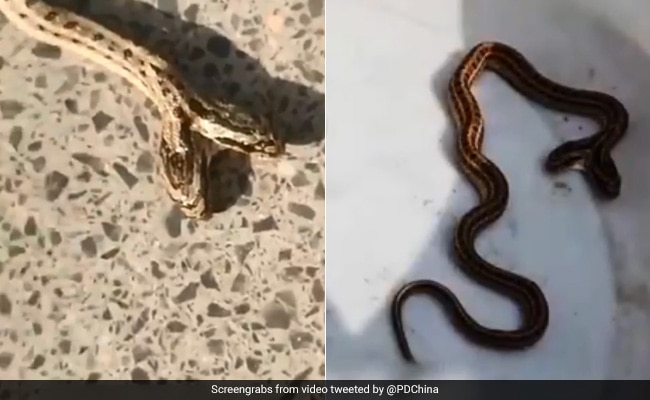 A two-headed snake was briefly captured in China.

A farmer in China was recently shocked to see a two-headed snake slithering across his yard. According to local reports, the farmer - identified only by his surname Shenzhou - said that he found the two-headed snake in his home on Monday. The incident occurred in a village in China's Hebei province.

Mr Shenzhou says that he managed to capture the snake and put it in a pot for others to see. The rare snake soon attracted a stream of visitors from the village, all of them eager to catch a glimpse of the two-headed reptile. However, the snake soon made its escape when a child knocked the pot over.

A video, shared by People's Daily China, shows the two-headed snake slithering across the floor. Watch the video below:

A two-headed snake broke into a farmer's yard in Shenzhou, N China's Hebei, and escaped later. Have you ever seen any "fantastic beasts" in your life? pic.twitter.com/YKzU0IUdji

The video has collected over 21,000 views since it was shared on Twitter a few hours ago. It has also collected a number of reactions, some shocked and others fascinated.