The incident took place at the Nemo Dolphinarium in Odessa, Ukraine 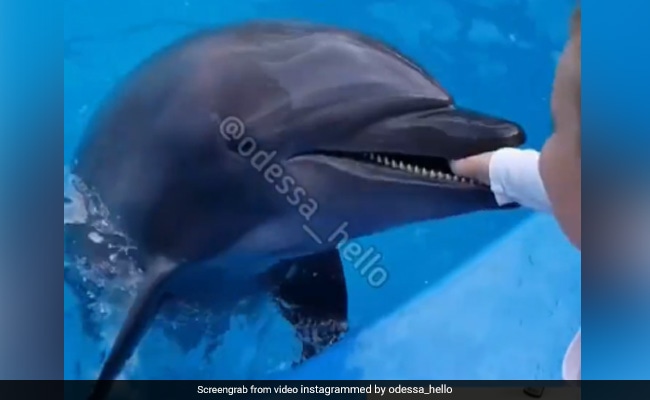 A dolphin at a Ukraine aquarium bit a six-year-old.

A shocking video has captured the moment a dolphin leaped out if a pool and bit a six-year-old boy's hand, possibly mistaking it for food. According to Daily Mail, the incident took place at the Nemo Dolphinarium in Odessa, Ukraine, on Sunday. Footage filmed by the boy's mother has since gone viral online.

It shows the unidentified child standing with his arm outstretched over the pool. Within seconds, a dolphin jumps out and grabs hold of his hand. As the boy yells out in pain, the dolphin lets go and retreats into water once more.

The shocking clip has racked up thousands of views on social media since it began circulating online last week.

According to Metro News, the boy was immediately rushed to the hospital, where he received stitches for his injuries.

The dolphin's trainer said that the mammal was not trying to hurt the boy and probably mistook his hand as a signal for treats. Olena Komogorova, the Dolphinarium's head trainer, said: "A hand, stretched above the water, means that somebody offers a treat."

The staff also said that visitors were warned not to approach the pool or put their hand near the water.

The boy's mother, while speaking to local media, reportedly blamed herself for the incident and said she was not planning to sue the aquarium.

The Nemo Dolphinarium is now planning to strengthen its security measures to avoid any repeat incidents.